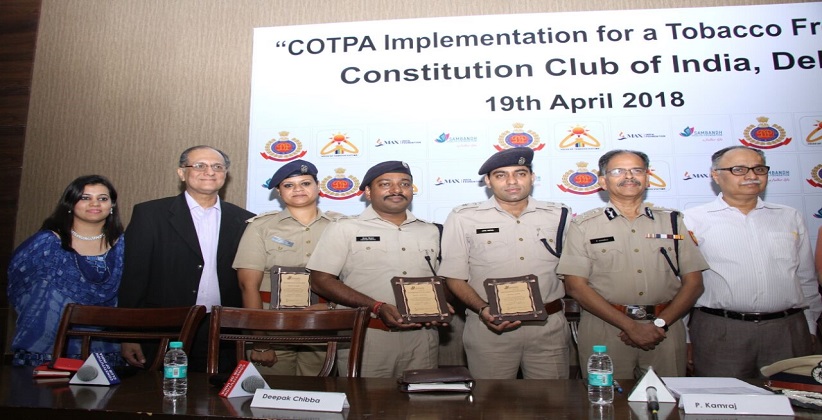 The Cigarettes and Other Tobacco Products Act, 2003 (COPTA) is a comprehensive legislation that prohibits smoking in public places, direct/indirect advertising and promotion, sale to/by minors, sale within 100 yards of schools and sale of tobacco-products without statutory warnings. Though, reducing the tobacco usage is imperative to improve the health of both consumers and non-consumers. People of every generation are getting addicted to this evil stuff.

A seminar held on April 19, 2018, at Constitution Club of India, New Delhi in awareness of COTPA organized by Delhi Police in association with Sambandh Health Foundation and Max India Foundation.  Initiating a fight against reducing tobacco usage, Delhi police has taken a good initiative by taking strict action against offenders under COTPA. In this regard, Dr. Harit Chaturvedi, Chairman Max Oncology, and VoTV patron said, "15 lakh people are suffering from cancer in India, and 50% of all cancers and 90% of oral cancers are caused due to tobacco intake. If tobacco is eliminated from the society, we can prevent 50% of all cancers. In Delhi, about 11% of the population smokes but this subjects the other 89% to second-hand smoke and puts their heart at risk. Hence, this campaign by Delhi Police protects the health of Delhi public and is to be applauded."

Anil, a victim of tobacco who overcome this horrendous disease and a survivor shared his ordeal that he had two major surgeries of his jaw.
He said that he started consuming tobacco at a very early age. After developing this disease, he even lost all his confidence and hope of life. Eventually, he survived and now actively fighting against tobacco usage.

Applauding Delhi police, Ms Mohini Daljeet Singh, CEO, Max India Foundation said, "Delhi has a tobacco prevalence of 17.8%, and this causes more than 10,000 deaths per annum attributable to tobacco. 81 children initiate tobacco usage per day. We commend the good work done by Delhi police in saving our youth." She also said, "We work for the healthcare of underprivileged people, and we opt for the prevention of cancer. In this regard, we approached Delhi police to deal with COPTA and last year we launched this program. We also give training to police as to how to prevent people for COTPA."

Mr. Deepak Chhibba, a member of Sambandh Health Foundation also shared the relevance of COTPA Act passed in 2003 which prohibits direct and indirect advertisements promoting tobacco, smoking in public places and selling of tobaccos to minor and being sold by minors is also prohibited.

Global Adult Tobacco Survey (GATS) by Ministry of Health & Welfare conducted a survey which indicated that the Kerala and Karnataka witnessed a 40% fall in tobacco usage. However, in Delhi from a level of 700 challans in September 2017, Delhi police raised this level to 6000 challans in February 2018. The top three performing districts which worked best among all 14 districts of Delhi police are DCP Chinmoy Biswal of South-east district in which 7460 challans have been made in last five months. DCP Jatin Narwal of North district having 4600 challans while DCP Romil Baniya challaned 4040 in this period and for their exceptional efforts all three DCPs honored with trophies.

Under the leadership of Special Commissioner of Police, Law & Order (South), Mr. P Kamraj said, "We first trained and sensitized our Police force on COTPA. Thereafter, we start taking action on people caught smoking in public places or selling tobacco with 100 yards of an educational institute. Sambandh Health Foundation and Max India Foundation have provided us constant support. We must contribute in a big way against the evils of tobacco. We will continue this important initiative so that behavioral changes take place in smokers thereby also helping non-users who suffer the ill effects of passive smoking.
We are getting better encouragement because of which we were able to show the results and these trophies are its proof as well. Delhi police will continue to keep striving in not only preventing but also in making awareness against tobacco evils and its usages."