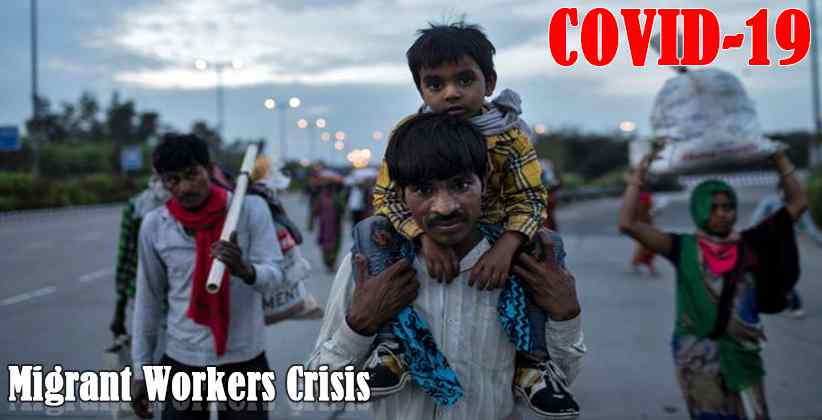 The Supreme Court on June 05, 2020 has allowed the intervention application filed by the National Human Rights Commission (NHRC) in the suo motu case concerning the plight of migrant workers amid the COVID-19 pandemic. Interestingly, earlier, the NHRC itself had also taken suo motu cognizance of the issue.

The three-Judge Bench of Justices Ashok Bhushan, Sanjay Kishan Kaul, and MR Shah is hearing in re: Problems and Miseries of Migrant Labourers. After a long and detailed hearing which lasted for over an hour, the Apex Court has reserved its order in the matter, which will be delivered on June 9, 2020.

The NHRC has been set up by an Act of the Parliament under the Protection of Human Rights Act, 1993 for the Protection and Promotion of Human Rights. Section 12 of the Act lays down the functions of the commission, including among others, under section 12(b) to intervene in any proceeding involving any allegation of violation of human rights pending before a court with the approval of such court and under section 12 (d) to review the safeguards provided by or under the Constitution or any law for the time being in force for the protection of human rights and recommend measures for effective implementation.

Through intervention, the NHRC seeks directions from the Court for implementation of short term and long term measures that may be considered by the Court to decrease the plight of the migrant workers and to ensure that the human rights of these poor laborers are not violated, mentions application.

i. To estimate the in-flow of migrant workers, States should collect the data of migrant workers at the point of departure in the originating State as well on arrival in the destination States. This will help States to effectively plan quarantine and relief measures for the migrant workers.

ii. The Government of India and the State Governments must ensure proper implementation of the Inter-State Migrant Workmen (Regulation of Employment and Conditions of Service) Act, 1979 so that the migrant workers are provided with a journey allowance.

iii. Menstrual hygiene products should be provided to migrant women and adolescent girls across the country.

For example, at the Andhra-Odisha border in Odisha’s Ganjam district, the women and adolescent girls among migrant workers walking homeward on the NH16 have received menstrual hygiene products, along with food and other relief material, from Youth for Social Development (YSD), an NGO.

iv. Each state should be directed to ensure the proper functioning of shelter homes especially for the accommodation of pregnant women, lactating mothers, children, and elderly persons. It should be ensured that medical facilities and nutritious food are available in these shelter homes.

v. Each State should be directed to identify the industry in which the migrant labor is working i.e construction, agriculture, brick kiln, etc. This identification will aid the State in creating schemes for the migrant workers and in the preparation of a State-wide and Nationwide database.

vi. States should be directed to take steps for the support of migrant workers, similar to the steps taken by the State of Odisha which have set up a toll-free Shramik (labor force) Sahayata Helpline, Migrant Labour Help Desk, seasonal hostels for the children of migrant workers, and has strengthened Anti-Human Trafficking Units for migrant workers.

vii. States must ensure medical facilities for check-ups for migrants before and after the journey, as well as the availability of food and medical care during the journey. For migrants who are walking or traveling on bicycles, food and water should be made available both at the originating and destination states, as well as en route.

viii. The originating States should take steps to identify the destitute among the migrant labor and provide some quantum of compensation to ensure that they do not resort to begging after reaching their destination.

ix. It is of concern that as per many reports 40 percent of the Shramik trains are late, there is an average delay of 8 hours. Railways in consultation with the respective State Governments should ensure that such delays do not take place and the trains do not reach the wrong destinations. A mission similar to that of the dedicated Vande Bharat Mission should be started in a phased manner to help migrant workers reach their source destination.

x. A fund should be created for payment of ex-gratia relief by the concerned DM, which will provide fixed compensation to every migrant returning home.

i. A special provision to be inserted in the Inter-State Migrant Workmen (Regulation of Employment and Conditions of Service) Act, 1979 to deal with emergency situations like Covid-19, natural disasters, etc.

ii. Appointment of a claim commissioner to look into recovery from employers who abandoned their laborers despite notification for continuity of wages by Central Govt.

For example, it appears prima facie that the provisions regarding Accommodation as provided for under the Building and Other Construction Workers (Regulation of Employment and Conditions of Service) Act, 1996 have been ignored by the employer thus leading to a situation where the workers had to resort to traveling back to their home State.

iii. Allocation of funds to states to be allotted to gram panchayats to create employment opportunities in the home states of migrants.

iv. National portal for registration of migrants so that a nationwide database is created.

v. Compensation to family members of those who died while migrating to their respective states.

vi. Universal ration card to be granted to migrants

vii. Maximum benefits be extended to the migrant labor as provided for under the Unorganised Workers’ Social Security Act, 2008.

viii. The government announced it would launch a scheme for affordable rental housing for migrant workers and urban poor to provide ease of living by converting government-funded housing in cities into Affordable Rental Housing Complexes (ARHC). This would be carried out through PPP mode. This should be implemented as soon as possible in order to provide shelter to the migrants.

ix. There should be a nodal agency created under the Ministry of Labour for the resolution of inter-state migrant labor issues. The Secretary from each State/UTs should be a part of this nodal agency and will coordinate with the migrants in their respective states. A study looking at best practices from other countries on issues concerning migrant labor could be commissioned in order to implement or adapt the same in the domestic context.

x. A simpler registration process ensuring the understanding capability of the migrant workers. Also, the forms should be made available in the local language or the language that is most commonly used in the area.