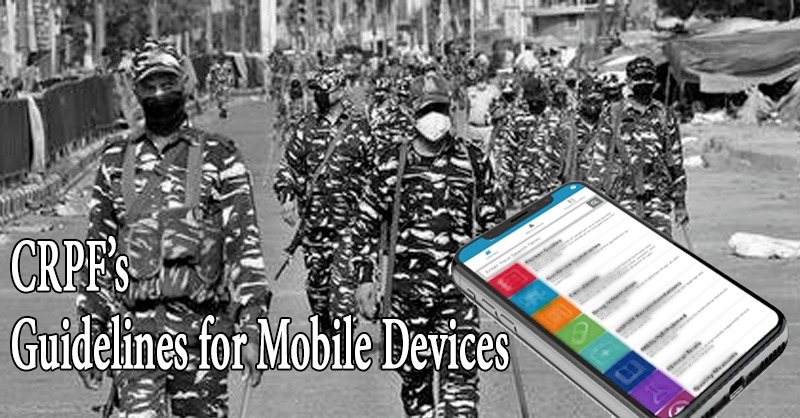 The Central Armed Police Forces (CAPF) refers to the uniform nomenclature of security forces in India under the authority of the Ministry of Home Affairs. Their role is to defend the national interest mainly against the internal threats. They are the Border Security Force (BSF), Central Reserve Police Force (CRPF), Central Industrial Security Force (CISF), Indo-Tibetan Border Police (ITBP) and National Security Guard (NSG), and Sashastra Seema Bal (SSB).

The Central Reserve Police Force (CRPF), being a part of the Central Armed Police Force has to protect the internal security as well as external aggression due to this they have to formulate various policies and take various decisions to function its duties efficiently

In consonance of performing its duty, they have issued new guidelines for smartphones & mobile phones providing that smartphones which store & record data are prohibited in "high sensitivity" areas including places designated or accredited for the processing, handling, or discussion of classified information in real-time, conference halls & operations rooms.

According to CRPF's new guideline, which will be applicable for all staff including jawans& civilian staff, smartphones will be kept at a specified counter if someone brings it to the office.

It said that "Every element of an information security program & every security control put in place by an entity should be designed to achieve one or more of these principles. Therefore, it is important to consider the acceptable & not acceptable use of smartphones in an organization. These guidelines outline the use of smartphones at work. Excessive unrestricted usage can lead to a breach of security".

They had categorized phones into 2 categories- smartphones & mobile phones.

The basic difference provided for these 2 is recording facilities via camera & use of the internet.

While on the other hand, usability has been described in three categories high, medium & low sensitivity area.

"Smartphones are allowed only after approval of Head of Office. Mobile Phones are allowed. Every person should inculcate a sense/duty of confidentiality," read the guideline.

CRPF said that "Guidelines for sharing of information over mobile phones will be similar to that of guidelines already issued for phones. Use of a mobile camera or recorder is strictly prohibited from recording any organizational confidential information".

At the time of duty, personnel is expected to exercise discretion in using phones.

Excessive personal calls during the workday can interfere with productivity & be distracting to others, CRPF has said in its smartphone guidelines.

According to the guideline, in low sensitivity areas, where there is no active duty & handling of unclassified documents, smartphones can be used without any restriction in such places.

CRPF in its detailed guidelines while giving description on guidelines for social media usage has said that government officials be sensitized that they are personally responsible for all content they publish on social networking sites, blogs & websites.

The Guideline reads, "Any posting or disclosure of classified documents of information is prohibited under the relevant laws & can invite even criminal proceedings in certain cases. It does not matter how the government officials get possession of such official".