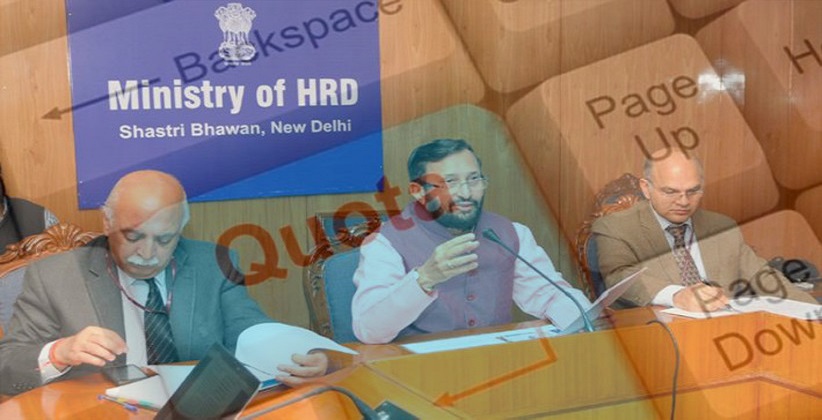 The 10 per cent reservation for economically weaker sections (EWS) among the general category will be implemented across all colleges and universities in the country from the 2019-20 academic year, Human Resource Development Minister Prakash Javadekar has said on January 15, 2019, while addressing a press conference in New Delhi.

This quota will be over and above the existing quotas for Scheduled Castes, Scheduled Tribes and Other Backward Castes, Mr. Javadekar said.

The minister has said that the quota would be implemented “across 40,000 colleges and 900 Universities in the country,” which made it clear that private institutions would also come under its ambit.

The government hopes to achieve the proposed action through a Bill that it plans to introduce in the budget session of Parliament that will make it necessary for all private colleges to create not just the EWS quota, but also force those that currently do not have a SC, ST, OBC quota to introduce these, the minister added.

Further, Mr. Javadekar said that “In the 2019-20 academic session, we will have this 10% reservation without disturbing, [while] keeping intact the SCs, STs and OBC reservation. This will be given in addition, by creating additional seats.”

“Colleges will be asked to include this information in their prospectus. The UGC and AICTE will be provided the operational mandate within a week to implement the quota,” he added.

The Parliament on January 9, 2019, passed The Constitution (One hundred and twenty-fourth amendment) Bill, 2019, to provide 10% quota in employment and education for the general category candidates who belong to the economically weaker sections.

Soon after the Bill was passed by the Parliament, it was challenged in the Supreme Court on the ground that the Bill violated the basic feature of the Constitution as reservation on economic grounds cannot be limited to the general categories and the 50% ceiling limit cannot be breached as it has been “engrafted as a part of the basic structure of the Constitution’s equality code” by the Supreme Court.

Rihanna Sues Her Father Over Use Of Their Surname ‘Fenty’