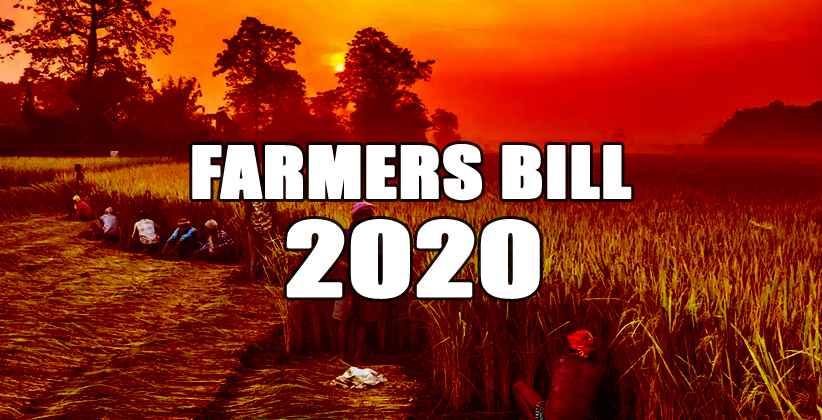 The year 2020 has been despotic on everyone, be it people from the upper echelon of the society or otherwise, especially farmers. It’s nothing new that farmers are suffering for the past few decades. The government in order to change the same introduced the Farmers Bills 2020, which comprise a total of three agricultural bills. These bills were passed by the Indian Parliament in September 2020. They were introduced to change the farming world and the poor condition of farmers; however, the farmers think that the bills are nothing but a threat. In this article, the topics of Minimum Support Price, key provisions and criticism of each Act, and the constitutional validity of the said Acts will be discussed.

For decades, millions of farmers in India are living in poverty due to poorly designed laws and various other problems that are still existing in India. With the vision to elevate the farming market, the Government came up with three bills in Parliament. Namely, they are:

These bills were passed on 27th September 2020. The attempt is a big structural change in the farm sector by the Government. The farmers are vehemently protesting against the newly introduced Bills. Farmers from Punjab, Haryana, and western Uttar Pradesh have gone on to accuse the central government of “anti-farmer” policies. They are scared that after the passing of these Bills, the condition of the farm market will only worsen. They are demanding the repeal of the three newly enacted laws and replace them with a new set of laws after taking the stakeholders into confidence.

To understand the reason behind protests let’s understand what the existing situation of the farmers and current provisions regarding MSP is (Minimum Support Price).

Traditionally, the produce from the farm market is governed by the Agriculture Produce Marketing Committee (APMC) Acts, 2017. Each state has its own set of rules which are governed under the Act. The State level APMC Legislation provides for the constitution of the committee. It also states its powers, functions, boundaries, levies, and dispute resolution. The legislation also provides provisions relating to the registration of vendors and levy of fees, cess, and other charges. [1]

Under the State Act, all trade of farm produce takes place at a designated Market Yard which is, in the local language, called “Mandi”. Every area has its own Mandi. All the transactions taking place at Mandi is through registered vendors and upon payment of applicable fees and commission.

If talking about contract farming, or where a deal is struck between buyer and farmer outside the Mandi, even then the fees and commission of the Mandi are still applicable. However, some states have allowed farmers to trade their farm produce outside the ambit of APMC (E.g.: Bihar [2] and Nagpur [3]).

Now let’s analyze key provisions and criticism behind it for each act:

This Act focuses on the market of agricultural produce. The Act seeks to provide for the creation of an ecosystem where the farmers and traders enjoy the freedom of choice relating to the sale and purchase of farmers' produce which facilitates remunerative prices through competitive alternative trading channels to promote efficient, transparent, and barrier-free inter-State and intra-State trade and commerce of farmers' produce outside physical premises of markets or deemed markets notified under various State agricultural produce market legislations; to provide a facilitative framework for electronic trading and matters connected therewith or incidental thereto. [4]

The biggest fear of farmers on this Act is about loss of MSP. MSP is considered to be farmers’ basic remuneration and the lack of mentioning it has become their biggest concern. After looking at the key provisions of this Act, it is clear that the role of middlemen will also be abolished.

Apprehensions other than MSP are the end of the existing system of APMC. The APMC system has contributed largely in Punjab towards the Green Revolution. APMC had always been under the supervision of the state government but the private marketplace will unregulated, lack of supervision of the government and market fee. Bypassing APMC will leave farmers vulnerable.

This Act seeks to provide for a national framework on farming agreements that protects and empowers farmers to engage with agri-business firms, processors, wholesalers, exporters, or large retailers for farm services and sale of future farming produce at a mutually agreed remunerative price framework in a fair and transparent manner and matters connected therewith or incidental thereto. [5]

According to the Act, it will protect the farmers against price exploitation, however, it does not take account of individual farmers or marginalized farmers (who constitute 85% of rural farmers) to be equipped or negotiate for a fair price with the private corporations. Clearly, the power of balance shifts from farmers to private corporations, and farmers might end up being the weaker party in the negotiation process.

Another apprehension is that the Act does not provide any price fixation mechanism for the farmers which will lead to giving free hand to private corporations. Small and marginal farmers, who constitute the majority of rural farming, are fearful of exploitation while engaging with large private companies and industrialists.

The three-tier dispute settlement which is prescribed by the Acts will effectively remove farming contracts from the ambit of civil suits and judicial review, by creating such a mechanism. The use of the word ‘Shall’ in Section 19 [7] of this Act makes it mandatory for the farmers to follow this mechanism. As the majority of the farmers are small and marginalized, it will be tough for them to collect resources to fight legal disputes against big private companies in the market.

This Act removes the abovementioned items from the list of essential commodities. There is a possibility that this action will deregulate the storage, production, movement, and distribution of these items. The farmers’ income may increase but it may impact the rural farmers and increase their poverty.

Another criticism of this Act is that it may increase the hoarding of food items by exporters during harvest time when the prices are usually low until a time when prices may increase. The state will not have any information or intelligence regarding the availability of the stocks, this could result in undermining of food items in the State. This will eventually adversely affect both farmers and consumers. If State will not have information about the stocks, it will create problems while extraordinary circumstances as mentioned above. It legally allows private companies to stock food items without restrictions on the stock limit except in extraordinary circumstances.

Furthermore, the term ‘extraordinary circumstances’ has not been properly defined in the Acts. The use of the word ‘May’ in Section 2 (1A) [8] of the Act has risen various questions on the implementation and intention of the Statute.

Numerous farmers throughout the country have termed these Acts as ‘anti-farmer’. But the biggest controversy apart from the potential adverse impact on farmers is the question of the constitutional validity of these three Acts. A petition has been filed in the Supreme Court challenging the constitutional validity of these Acts. The plea alleged that the bills were hastily passed by the Parliament without adequate discussion and in breach of Parliamentary rules.

As per the petitioners, the farm laws pertaining to agriculture trade are against the constitutional provisions. Agriculture and agricultural trade is a State subject as it come exclusive with the State List (given in Seventh Schedule of our Constitution). It is argued that Centre cannot intervene and make laws on the same as it is a part of State List. They also argued that the farm laws are against the fundamental rights guaranteed under the Constitution of the country.

The Acts were introduced for the betterment of the farm world. According to the Government, these Acts are laudable and “a watershed moment in the history of Indian agriculture”, but it seems more like a ‘red flag’ for the farmers. The old agricultural laws indeed had flaws in them but critics along with the majority of the farmers believe that rather than implementing the introduced Acts, Government needs to plug the loopholes in the old agricultural system. A similar sort of system was adopted by America and some other European countries as well, but the outcome was not as expected as farmer suicide rate increased and eventually, the system failed miserably. We can just speculate and hope that this does not happen with India.

(Veronica Bajaj Student Lloyd Law College, The views expressed above are personal to the author)

“No civil Court shall have jurisdiction to entertain any suit or proceedings in respect of any dispute which a Sub-Divisional Authority or the Appellate Authority is empowered by or under this Act to decide and no injunction shall be granted by any court or other authority in respect of any action taken or to be taken in pursuance of any power conferred by or under this Act or any rules made thereunder.”

“(a) the supply of such foodstuffs, including cereals, pulses, potato, onions, edible oilseeds and oils, as the Central Government may, by notification in the Official Gazette, specify, may be regulated only under extraordinary circumstances which may include war, famine, extraordinary price rise and natural calamity of grave nature;”