Home Executive FTSC scheme to continue up to 31st March, 2023 with total outlay of Rs 1572.86 Cr: Rijiju to RS
Executive 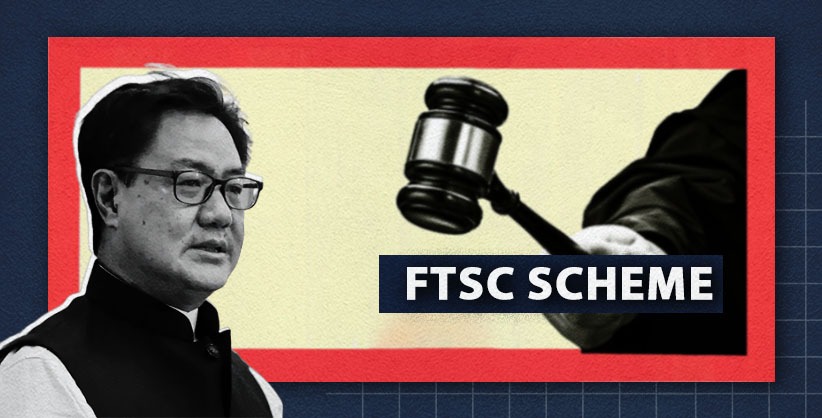 NEW DELHI: Law and Justice Minister Kiren Rijiju on Thursday informed the Rajya Sabha the Department of Justice is implementing a Centrally Sponsored Scheme for setting up 1023 Fast Track Special Courts (FTSCs) since October, 2019 to provide speedy justice to the victims of rape and POCSO Act.

In a written reply to a question in the Rajya Sabha, he furnished details of Fast Track Courts/new Fast Track Court (FTC) set up and functioning along with the number of cases lying pending thereunder in the country during each of the last three years and the current year, State-wise, as per information provided by High Courts.

Setting up of FTC and allocation of funds lies within the domain of the State Governments which formed such courts as per their need and resources, in consultation with the respective High Courts.

The FC had further urged State Governments to utilize enhanced fiscal space available through tax devolution (32% to 42%) for this purpose.

The Union Government has also urged the State Governments to allocate funds for the setting up of FTC, from the financial year 2015-16 onward.

"Further, in pursuance to the Criminal Law (Amendment) Act, 2018, the Department of Justice is implementing a Centrally Sponsored Scheme for setting up 1023 Fast Track Special Courts (FTSCs) since October,2019 to provide speedy justice to the victims of rape and POCSO Act. The FTSC scheme which was initially for 1 year, has been continued up to 31st March, 2023 at a total outlay of Rs.1572.86 Cr with Rs.971.70 Cr as Central Share to be funded under Nirbhaya Fund. As on 31/10/2022, 733 FTSCs are functional in 28 States/UTs," a statement said.

It further said a plan scheme for action research and studies on judicial reforms is being implemented by the Department of Justice under the National Mission for Justice Delivery and Legal Reforms since 2013.

Under this scheme, a study on “Evaluation of Functioning of Fast Track Courts in India” was conducted by National Law University, Delhi. As per the findings of the study, the establishment of FTCs was not accompanied by special infrastructure, special administration, and separate cadre of staff or relaxation of the procedure. Therefore, their working is no different from regular courts and they face the same structural difficulties as regular courts. The lack of adequate support has caused overburdening of the FTCs.

The following recommendations were made to improving the efficiency which has been brought to the knowledge of the concerned State Governments and High Courts:

* Appointment of more experienced Judges in the FTCs.

* Need for specific recommendations of the National Court Management System which are applicable to Fast Track Courts.

* Judges to put case-specific time frames for deciding cases in FTCs as suggested by the 245th report of Law Commission of India.

* Monthly meetings at the district level of all judicial officers in FTCs to monitor their progress and ensuring day-to-day hearing in a fast-track proceeding.

* Providing a safe and comfortable environment to victims especially women and children in all FTCs in the country by using modern technology like videoconferencing/videography.

* Judges to be provided with proper and updated modern facilities like computer, technical staff and internet.

* Incentives to be given to judges for the disposal of cases which are pending for more than five years.

* Vulnerable Witness Deposition Complexes (such as those established in Delhi) to be set up in other districts as well.

Public servants can be convicted on the basis of circumstantial evidence in graft cases: SC [Read Order]