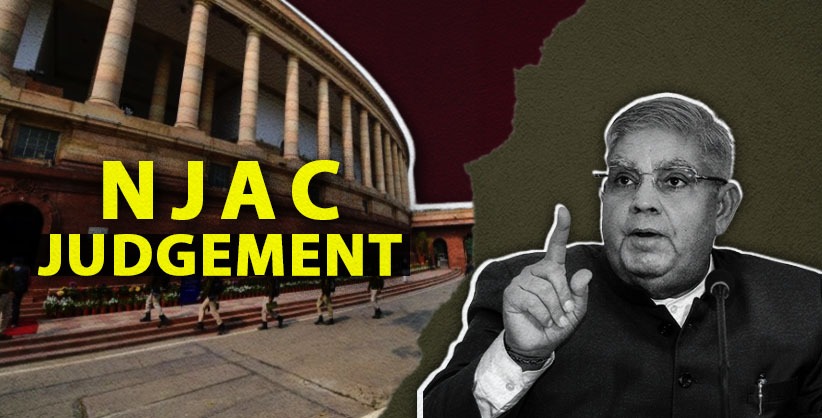 NEW DELHI: Vice President Jagdeep Dhankar on Wednesday described the Supreme Court's 2015 Constitution bench decision declaring the National Judicial Appointment Commission as unconstitutional, "a glaring instance of severe compromise of parliamentary sovereignty and disregard of the mandate of the people".

It is disconcerting to note that on such momentous issue, so vital to democratic fabric, there has been no focus in the Parliament, now for over seven years, he said.

Earlier, last week too, the VP had raised questions on the decision by the SC's five-judge bench.

In his maiden speech as chairman of Rajya Sabha, Dhankar said, "There is no parallel to such a development in democratic history where a duly legitimised constitutional prescription has been judicially undone."

He said Parliament in a much needed historic step passed the 99th Constitutional Amendment Bill paving way for the National Judicial Appointment Commission (NJAC). This was a legislative development to replace the Collegium system for appointment of judges in High Courts and the Supreme Court by a body comprising judges and others.

"There was unprecedented support. On August 13, 2014, the Lok Sabha unanimously voted in its favour with there being no abstention. This House too, passed it unanimously on August 14, 2014 with one abstention. Rarely in Parliamentary democracy, there has been such massive support to a Constitutional legislation," he said.

"This process fructified into a Constitutional prescription, after 16 State Assemblies out of 29 States ratified the Central Legislation; the President of India in terms of Article 111 accorded his consent on December 31, 2014," he pointed out.

Dhankar said the historic NJAC Bill, passed unanimously by the Parliament, was undone by the Supreme Court using the judicially evolved doctrine of 'Basic Structure' of Constitution.

"There is no parallel to such a development in democratic history of the world...We need to bear in mind that in a democracy, Basic of any 'Basic Structure' is the primacy of the mandate of the people reflected in the Parliament," he added.

Dhankar hoped this House, in concert with the Lok Sabha, being custodian of the ordainment of the people, is "duty bound to address the issue, and I am sure it will do so".