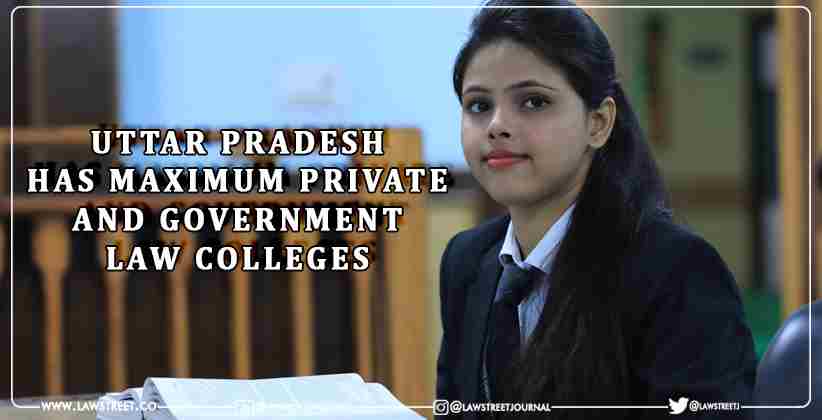 Replying to a Parliamentary question, the Union Law Ministry shared the data of the number of Law Colleges and Universities in India, while in the Lok Sabha. A total number of 317 law colleges and universities both run by the Private and Government sectors are there in Uttar Pradesh. While, Maharashtra has 198 and Madhya Pradesh has 156. The data for various such colleges all over India, was revealed.

The Union Law Ministry replied and presented the data to a question which was asked by M Selvaraj, CPI (M) Member of Parliament from the Nagapattinam Constituency. It was also highlighted, during the same discussion, that the responsibility of filling of vacancies in such colleges/universities is for the respective Institutes themselves, and that no data is maintained centrally with regard to the same.

The Union Law Minister upon being asked whether there were any proposals to set up new law institutes replied that there were none for consideration yet.

In September 2021, the Madras High Court, while hearing a challenge to Section 9 of the Advocates Act, 1961, had repeated the long-standing concerns about the mushrooming of sub-standard law colleges. The then Chief justice of Madras High Court, Sanjib Banerjee said that mushrooming of "cowshed law colleges" is an issue that needs to be addressed.

It was not the first time that the Court had discussed about this issue. The Supreme Court Bench consisting of Justice Arun Mishra and Justice Mohan Shamtangoudar had made interesting remarks about the mushrooming of private law colleges.

Justice Arun Mishra said, “You cannot open (private law) colleges like this. There should be some restrictions. One person cannot have ten children.”

Mr Sharma also raised issues with respect to sub-standard legal education in the country, which was ultimately affecting the standard of the legal profession. It was observed by the Council that there were enough institutions in all parts of the country to feed the law courts and to serve the people.

The resolution by BCI stated, “There is no dearth of advocates and the existing institutions are sufficient to produce number of law graduates annually.”

Rs 1,00,000/- Cost Imposed On Advocate for Filing Petition Without Vakalatnama