Govt. Bans Saridon And 327 Other Drugs Due To Health Risk. 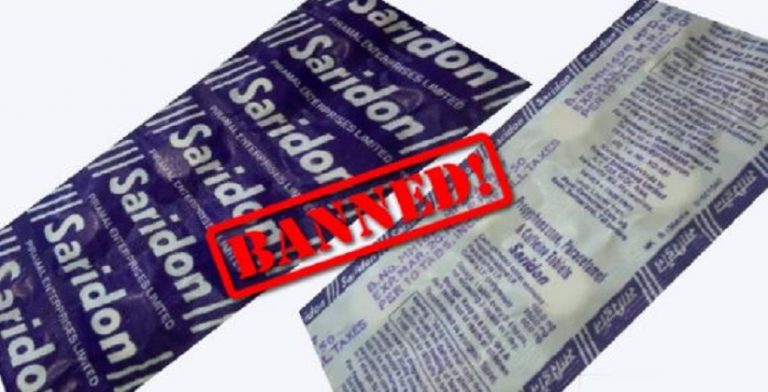 The Ministry of Health on September 12, 2018, banned the manufacture for sale or distribution of 328 fixed-dose combination (FDC) drugs with immediate effect. The banned medicines include brands like Piramal’s Saridon, Alkem Laboratories’ Taxim AZ and Macleods Pharma’s Panderm Plus cream.

Besides, banning 328 FDCs the ministry has also restricted the manufacture, sale or distribution of six FDCs subject to certain conditions, an official statement said.

Government sources said the move means that around 6,000 medicine brands belonging to different companies and with a combined market size of Rs. 2,000-2,500 crore may soon vanish from the drug market in the country. FDCs are two or more drugs combined in a fixed ratio into a single dosage form.

Earlier, on March 10, 2016, the Health Ministry, through a notification had prohibited the manufacture for sale and distribution for human use of 349 FDCs under Section 26 A of the Drugs and Cosmetics Act, 1940.

However, the matter was contested by the drug manufacturers in various high courts and the Supreme Court. The apex court on December 15, 2017, asked for the matter to be examined by an expert panel formed by the Drugs Technical Advisory Board (DTAB). The Board in its report to the Centre stated that there is no therapeutic justification for the ingredients contained in 328 FDCs and that these FDCs may involve risk to human beings.

Further, DTAB said these combinations may lead to overuse. According to the technical body, there is no need to expose the patients to that many ingredients when one will do the work. The notification stated, “Hence in the larger public interest, it is necessary to prohibit the manufacture, sale or distribution of this FDC…any kind of regulation or restriction to allow for any use in patients is not justifiable.”

The Board recommended that it is necessary to prohibit the manufacture, sale or distribution of these FDCs under the Drugs and Cosmetics Act, 1940 in the larger public interest.