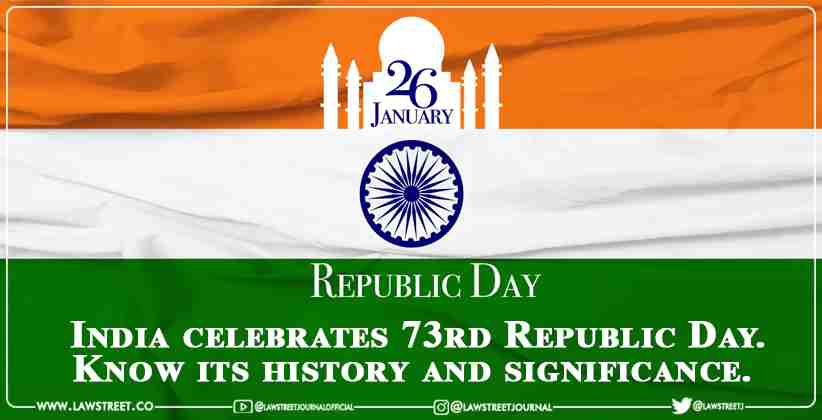 Republic Day marks the adoption of the constitution of India and the transition of the country to a republic on January 26, 1950. Every year, the celebrations marking the day feature spectacular military and cultural pageantry. In New Delhi, armed forces personnel march along the Rajpath, in an elaborate display of military might. The epic show on Rajpath eclipses everything else happening across the country on this auspicious day.

The country will celebrate its 73rd Republic Day on Wednesday albeit with a few changes keeping in mind the COVID-19 pandemic.

While our Independence Day celebrates freedom from British Rule, Republic Day commemorates the constitution coming into force. January 26 was the chosen date since it was on this day in 1929 that the Indian National Congress issued the Declaration of Indian Independence (Purna Swaraj), opposing the British Regime's Dominion status.

On August 15, 1947, India achieved independence. A committee was created a few days later, on August 29, to draft a permanent constitution for independent India. Dr. B R Ambedkar was made chairman of the committee. On November 4, 1947, the committee drafted the constitution and submitted it to the Constituent Assembly. The Assembly met in numerous sessions for nearly two years before finally adopting the Constitution. On January 24, 1950, the 308 members of the Assembly signed two handwritten versions of the agreement - one in Hindi and one in English - after much deliberation and a few changes.

The constitution came into effect two days later, on January 26, 1950. Dr Rajendra Prasad began his first tenure as President of the Indian Union on that day.

India's constitution, which was formally adopted in 1950, replaced the British colonial Government of India Act (1935) as the country's governing text.

How Republic Day is celebrated

Celebrations for the Republic Day begin on 24 January. However, this year it began a day earlier with 'Parakram Diwas', the birth anniversary of Netaji Subhas Chandra Bose.

The president addresses the nation on the eve of the Republic Day.

Before the main celebration of Republic Day begins with the largest and most important parades of the year, the prime minister lays a floral wreath at the Amar Jawan Jyoti, which is followed by two minutes of silence to pay respect to the fallen soldiers of India.

After the president, the prime minister and the chief guest reach the dais, the former unfurls the National Flag as the National Anthem Jana Gana Mana is played.

The Indian Army Regiment of Artillery then gives a 21-gun salute.

The president then bestows important awards like the Ashok Chakra and Kirti Chakra are to the people from the armed forces for their exceptional courage in the field and also the civilians who have distinguished themselves by their different acts of valour in different situations, either in the military, civilian or disaster scenarios.

This is followed by the parade, which starts from the gates of the Rashtrapati Bhavan and goes through Rajpath, India Gate till Red Fort. But due to Covid-19, it will only go up to the National Stadium this year.

The parade showcases India's defence capability, cultural and social heritage as different regiments of the Indian Army, Navy and Air Force with their bands march past.

The president, who also holds the position of the Commander-in-Chief of the Indian Armed Forces, is saluted by forces.

The parade also includes a display of daredevil motorcycle riding skills by the motorcycle units of the Armed Forces and civil security services. A flypast by the Indian Air Force jets and helicopters also enthrals the viewers.

Republic Day celebrations come to an end with Beating Retreat on 29 January.

The beating retreat is performed by the bands of the three wings of the military - the Army, Navy and Air Force.