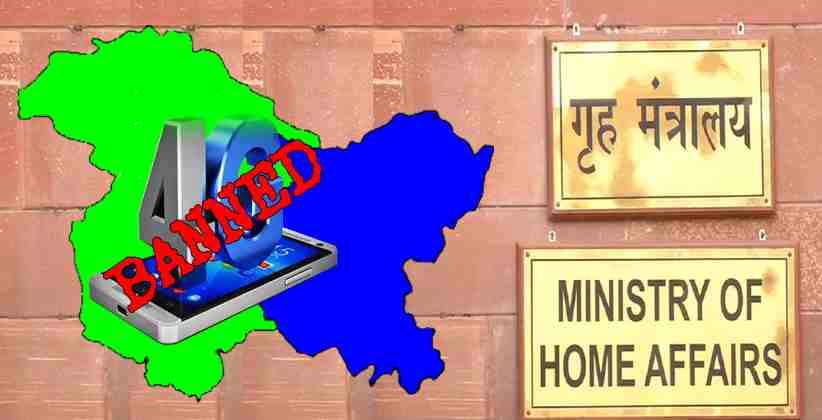 Responding to the contempt petition filed by Foundation for Media Professionals(FMP) in the Supreme Court, the Ministry of Home Affairs had filed a counter-affidavit wherein it stated that the Special Committee set up to review the internet restrictions in Jammu and Kashmir has decided against restoring 4G internet in the region for now.

The affidavit states that in it’s meeting held on 10th June the  Special Committee had decided that after much consideration and wide-ranging assessment of the current situation in the sensitive region that no further relaxation on internet services including 4G services could be carried out at the present.

The affidavit states that a copy of the report of the Committee will be presented before the Court.

The next review meeting of the committee will be after 2 months.

FMP had alleged that the internet restrictions were extended in J&K without constitution a Special Committee which was refuted by MHA saying that the Special Committee was constituted on the day of the judgment was given by the  Supreme Court on 11th May, and there were no separate orders required.

The 6-page affidavit states that the Committee’s first meeting was held on 15th May which was four days after the SC verdict and that matter was discussed from all aspects, including the prevailing security situation in Jammu and Kashmir and the impact of restrictions placed on 4G services in the region.

It is claimed that the suggestions made by the petitioners before the SC were also discussed and debated.

The contempt petition was filed on 9th June by FMP where it alleged that the Special Committee to be set up for a review of the internet curbs in Jammu and Kashmir has not been constituted as per the SC directions.

The bench was headed by Justice NV Ramana. The bench declined to order the immediate restoration of 4G services in the region amid the pandemic and lockdown.

The bench was of the view that since the issues involved affect the State, and the nation, the Review Committee which consists of only State-level officers, may not be able to address the issues satisfactorily. They found it appropriate to constitute a Special Committee consisting of the Secretaries at national, as well as State, level to look into the prevailing circumstances and immediately determine the need of continuing the restrictions in the Union Territory of Jammu and Kashmir.

In the contempt plea, it was said that even after the directions from the Apex Court the internet restrictions in Jammu and Kashmir were extended, without constituting a Special Committee.

This amounted to willful disobedience of the SC as per FMP.

After SC's judgment of 11th May, the J&K administration has extended the internet curbs thrice on 27th May, 17th  June, and 8th July citing the threat of cross-border terrorism. The administration also claimed that 2G internet speed has not caused any impediment to Covid-19 control steps, online education, or e-commerce.

An application for immediate restoration of 4G internet services in the region was also filed by FMP. It was stated that the denial of the same amid the pandemic and lockdown has resulted in disrupting medical services, online education, and e-commerce activities.

A complete blackout of communication was imposed in the erstwhile state of J&K was imposed by the Central Government in August 2019, right after Article 370 was abrogated. However, in January 2020, on the basis of a Supreme Court order, the services were partially restored at 2G speed for mobile users. Access was provided only to a select few white-listed sites, and social media was completely blocked.

It was observed by the Apex Court had that indefinite suspension of the internet is not permissible and restrictions on the internet have to follow the principles of proportionality under Article 19(2).

The blockade on social media was lifted on 4th March, but the speed was retained as 2G for mobile data.

Karnataka High Court: Centre must publish draft notification in regional languages, or it will be stayed