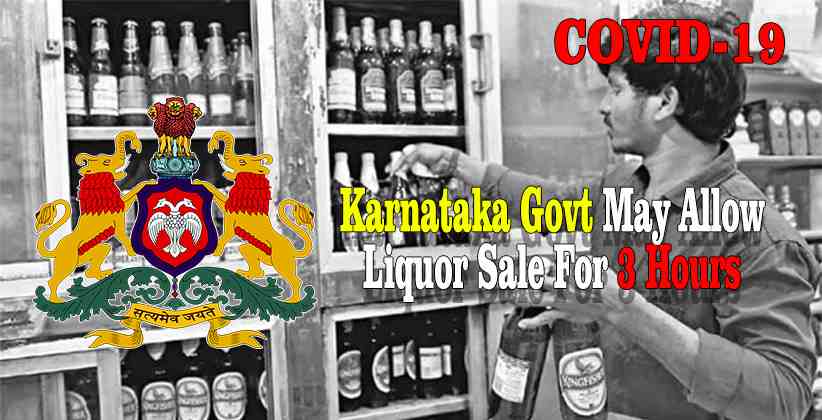 The Karnataka Government might consider the sale of liquor for limited hours between 10 am to 1 pm if the coronavirus lockdown gets extended.

According to officials of the excise department, “the government of Karnataka is planning to make liquor available as there have been incidents of alcohol-addicted people committing suicide and facing health issues due to withdrawal symptoms. There has also been a rise of burglaries at wine stores across the state since March 24”.

The excise department has proposed to permit the sale of liquor between 10 am to 1 pm if the lockdown is extended in Karnataka beyond April 14, and Yediyurappa M, the Chief Minister will make a final decision on the same soon.

According to the excise earnings for 2019-2020, the government earns an average of ₹1800 crores a month. The government was hoping to earn ₹22,700 crores, exceeding the target of Rs. 450 crores, as per the current year budget.

An excise official stated to the media that, “the government has been cash strapped since the lockdown has hampered revenue collection. The state government is short of the revenue target by around ₹5000 crores. So it needs to find better ways to increase revenue collection by permitting the sale of liquor”.

The excise official also added that “the Chief Minister, BS Yediyurappa did not permit the sale of liquor before April 14, but they are mulling over the situation of allowing liquor sale after this”.

A senior excise official stated that “if vends are suddenly opened for a few hours, then the government must allow all liquor shops to function for a full day or allow only MSIL outlets to operate full time, apart from issuing stringent guidelines for the public to follow while purchasing liquor”.

The Karnataka Government had banned the liquor sale in the state on March 21, four days before the nationwide lockdown announced was imposed by PM Modi.

Apart from tending to the needs and health conditions of alcohol-addicted people in the state, financial consideration has also prompted the state government to look into the matter of sale of liquor during the lockdown. The sale of liquor is the second-highest money-spinner after commercial tax for the government of Karnataka.