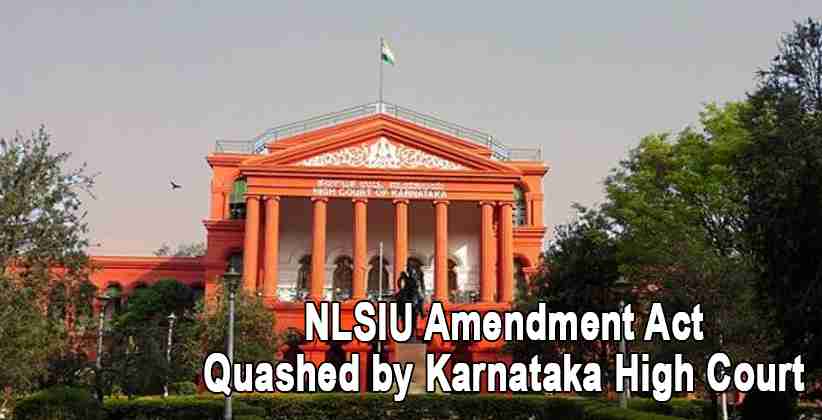 On September 30 2020, the Karnataka High Court quashed the National Law School of India University (NLSIU) Amendment Act, 2020. The Amendment Act guaranteed a 25 % reservation for students who had a state domicile. The order for quashing the amendment act was passed by a Division Bench that comprised of Hon’ble Justices BV Nagarathna and Ravi V Hosmani. The order was passed amidst a batch of pleas that challenged the 25 % Domicile reservation of the Premiere Bangalore College. While passing the order, the Bench held that the NLSIU Amendment Act, 2020 was ultra-virus and contrary to the provisions of the parent act.

The order passed by the Division Court read, “For the aforesaid reasons, the impugned reservation (under NLSIU Amendment Act) is struck down as the intelligible differentia has no nexus to the object sought to be achieved and therefore, does not meet the twin tests under Article 14 of the Constitution.”

Further, the Court opined that the State Government is not empowered to enact the Amendment Act. To upheld this, the Court added, “By this, we do not mean that it does not have the legislative competence under Schedule VII of the Constitution of India...We note that the state did not retain or reserve any role for itself in the matter of administration, management, and control of the Law School. Thus, the Amendment is ultra vires the Act.”

The court made a note that stated that while NLSIU might be an autonomous and independent entity. It has an “all India national character”. The Court also referred to the parent Act and stated that the power to introduce reservation lied only with the Executive Council of NLSIU. The court further opined that the NLSIU is not on par with other law schools there is a multitude of differences including its curriculum, reservation policy, control of Bar Council of India, trimester system, manner of incorporation, Chancellor being Chief Justice of India, etc.

Further, the court held that due to the lack of scientific data validating the reservation, the policy serves no purpose along with being contrary to the objects to the objects of the law school.

However, in its order, the court stated that it shall not interfere with the decision to increase the seats for the undergraduate course of the college. The court has also directed NLSIU to comply with the timeline for admission of CLAT students.