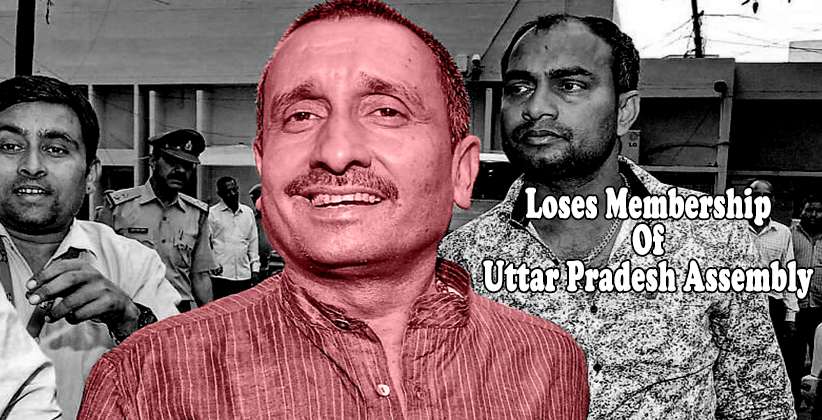 BJP MLA Kuldeep Singh Sengar has been disqualified from the membership of the Uttar Pradesh Vidhan Sabha as his Bangarmau seat in Unnao district has been declared vacant from that date and expelled, following his conviction in the rape case by a Delhi sessions' court in December. The Delhi court had pronounced its verdict of captivity on December 20, 2019 The rape victim's father, who had been arrested by the police, died in custody two days later, after he was beaten up within the lock-up by Sengar's brother, Atul Sengar.

In a notification issued by the UP Vidhan Sabha, Sengar has been deemed disqualified with effect from December 20, 2019 and his Bangarmau seat in Unnao district has been declared vacant. Kuldeep Sengar is a four term MLA who was accused of rape by a woman from his Makhi village. The girl attempted self-immolation outside the Chief Minister's residence in April 2017 when the police didn't take action on her complaint.

As public outrage erupted, Chief Minister Yogi Adityanath handed over the case to the CBI and Kuldeep Sengar, his brother Atul were arrested. In July 2019, the rape victim with her family and lawyer met with a serious accident in Rae Bareli. Her two female relatives died in the car crash after the accident while she and her lawyer were seriously injured and were admitted to hospitals. Both were airlifted to Delhi for treatment in furtherance with the Supreme Court order and therefore the family alleged that Kuldeep Sengar had masterminded the accident.

However, the CBI didn't find any evidence of Sengar's involvement in the accident. The Supreme Court had ordered that each of the cases associated with the rape case be heard in Delhi, where a sessions' court convicted Kuldeep Sengar in the rape case in December and awarded him life term imprisonment .