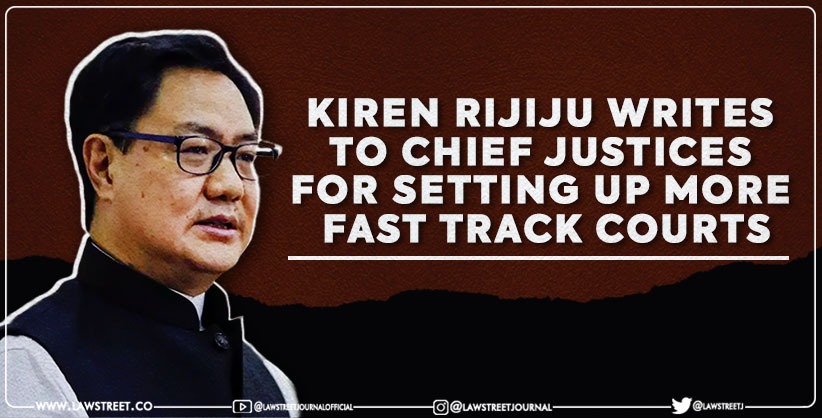 Law Minister Kiren Rijiju has written to the chief justices of the high courts to accelerate the process of setting up fast-track courts and fast-track special courts in their respective states to hear cases of heinous crimes against women, children and senior citizens.

In the letter, the minister noted that of the 1,800 Fast-Track Courts (FTCs) recommended by the 14th Finance Commission, only 896 were functional as of July 31 and more than 13.18 lakh cases were pending in these courts.

In the case of the Fast-Track Special Courts (FTSCs) set up under a centrally-sponsored scheme for hearing rape and Protection of Children from Sexual Offences (POCSO) Act cases, he noted that of the 1,023 courts sanctioned, 731 were operational as of July 31 across 28 states and Union territories.

The Minister highlighted that more than 3.28 lakh cases were pending in the FTSCs, which was “an alarming situation”.

Rijiju’s letter to the chief justices of the high courts came after a thorough review of the FTCs and FTSCs by the Law Ministry.

The law minister also urged the chief justices to give necessary instructions and support to the courts concerned to ensure a speedy disposal of cases and prevent the creation of a backlog.

Upon analysis of State wise details it is revealed that while 88,000 (approx.) monthly new cases are registered, case disposal is approximately 35,000, leading to ever increasing pendency of cases, it said.

The Union government has been allocating sufficient funds in every year's budget for the FTSC scheme and Department of Justice has been repeatedly following up with the State Governments and High Courts for availing the allocated funds and its timely utilisation.

However, in many States the pre requisite compliances for the release of CSS funds under the Public Financial Management System (PFMS) are not fully complete or are partially complete leading to under utilisation of the allocated budge, it pointed out.

The Department of Justice started a Centrally Sponsored Scheme (CSS) in October, 2019 in pursuance to Criminal Law (Amendment) Act, 2018, for the expeditious disposal of cases related to rape and POCSO Act for setting up of 1023 FTSCs including 389 exclusive POCSO Courts based on the then pendency of cases (1.67 lakh as on 31st March, 2018).

On analysis it reveals that monthly 10,000 (approx.) new cases are registered while disposal is 6,000 (approx.) and hence pendency is continuously increasing. As on July, 2022, total pendency of rape and POCSO Act cases is more than 3,28,000 which is an alarming situation.

The Minister made the following requests to the chief justice:

1. In view of the huge pendency of cases, the balance number of FTCs in your respective jurisdiction may be set up with due consultation of the State Government as envisaged in the 14th FC through increased share of fund devolution to States and as urged by the Union Government.

2. As per the centrally sponsored scheme of FTSCs the remaining number of courts in your respective jurisdiction may be setup and operationalized on priority basis.

3. To ensure the speedy disposal of cases and prevent creation of backlog. necessary instructions and support may be given to the courts concerned and a strict monitoring mechanism may be set up for the timebound disposal of cases by the FTCS/FTSCS.

4. Necessary compliances as mandated under PFMS may kindly be ensured for timely availing of the allocated Gol funds for FTSCs.

There should be no restriction of time for arguing counsel, Dave tells SC in Hijab Hearing