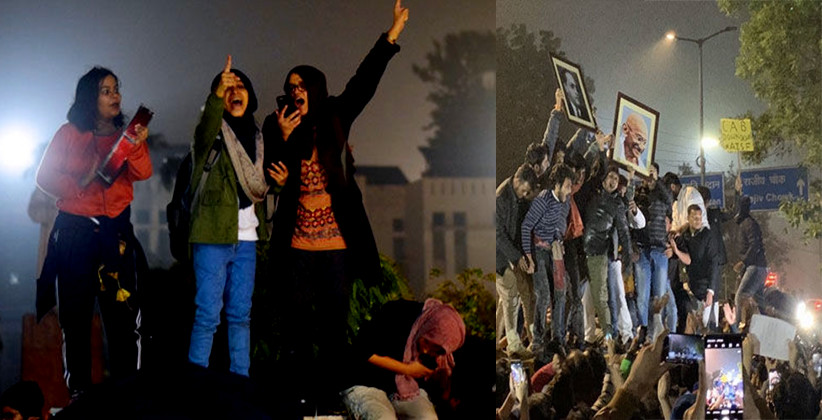 Recently, a Statement of Solidarity was issued by student bodies of top law schools of India like NLSIU, NALSAR, WBNUJS, NLUO, MNLU Mumbai, MNLU Nagpur, HNLU, NUSRL and NUALS supporting the protests initiated by the students of Jamia Milia Islamia and Aligarh Muslim University. A plethora of alumni from NLUD, NLUJ and the Legal Aid Clinic of JGLS  have also condemned the police attacks at the Universities in the wake of protests against the Citizenship (Amendment) Act, 2019.

The joint statement issued by multiple national law schools reads, “These actions against the protesting students have violated their constitutional protections endangering their lives and brought shame to our democratic values that we cherish and strive to uphold. We stand with these students who suffered such brutality from the state over their peaceful protests and extend our support to them unconditionally.”

Similarly, the Student Union of CLC, Delhi University issued a statement stating, “The country based classification violates Article 14 as it fails the “manifest arbitrariness” test. Further the statement of solidarity also states that, “Democratic and peaceful protests are being suppressed through inappropriate and indecent tactics. The students’ union stands in solidarity with millions of concerned Indians protesting against the proposed bill.”

The statement issued by NUJS demands the government to acknowledge and respect the fundamental right of citizens to protest peacefully and allow its’ citizens to exercise their rights freely.

While students across the country abhor the violent police attacks, a plea was made before the Supreme Court of India to take suo moto cognizance of the matter. At this point, the statement of solidarity issued by NLUJ reads that, “While the SC has agreed to take suo moto cognizance of the matter, it has issued a warning to the students of Jamia Milia Islamia, going as far as to say that if the destruction of public property does not stop, The Court will refuse to hear the matter. Doing this makes enforcement of fundamental rights contingent on circumstances, and delays urgent action needed to undo the wrongs of last night.”

Meanwhile, Chief Justice of India, S.A. Bobde  stated that “The Supreme Court has limited powers as it is a law and order issue”