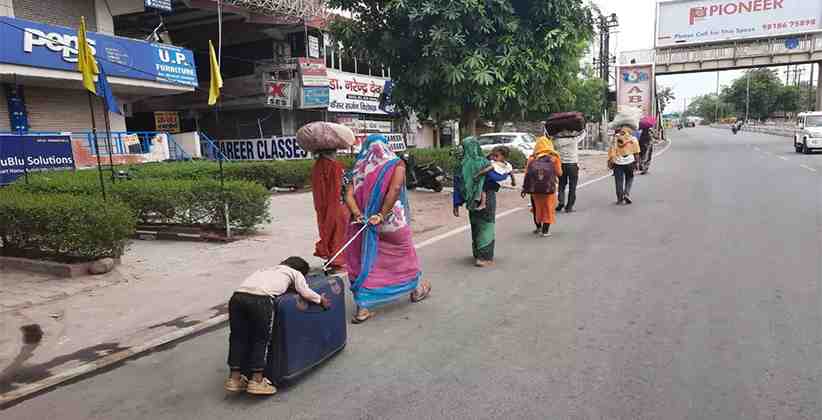 On May 15, 2020, The National Human Rights Commission, NHRC, India has taken suo motu cognizance of media reports about a mother pulling a suitcase with her small child sleeping half hung on it on Agra Highway. It was reported by all major media platforms that the migrant woman was walking all the way from Punjab to Jhansi in Uttar Pradesh to reach her hometown.

The Commission has observed that the Central and the State governments are working sincerely to address every issue coming up during the lockdown in this unprecedented situation. But it was surprising that the pain of the child and the family could be seen and felt by many en route, but the local authorities. The Commission further remarked that had the local authorities been vigilant, some relief could immediately be provided to the aggrieved family and others facing `similar hardships. According to the Commission, this is nothing but a violation of human rights and intervention by the NHRC is necessary.

In this regard, the Commission has already issued notices to the Chief Secretaries of Punjab and Uttar Pradesh and the District Magistrate, Agra, Uttar Pradesh calling for a detailed report within four weeks in the matter. It also asked to be appraised about the action taken against the responsible officers/ officials and relief/ assistance provided to the victim families.

The Commission further wrote in the press release that this is not the single incident and several such several news reports about miseries of people have come to its notice during the lockdown which has forced it to intervene in order to sensitize the Central and the State authorities to deal with the situation with an approach of respect to human rights of the public at large and particularly the vulnerable sections of the society. The Commission has also observed that even after its efforts, media reports still continue to suggest continuing sufferings of the people, more so of the migrant laborers, who are embarking on a long journey to reach their home.

On May 14, 2020, the NHRC had taken suo motu cognizance of another such incident from media wherein a pregnant migrant woman, who was walking on foot from Maharashtra to Madhya Pradesh, had delivered her baby on road. Surprisingly she rested for 2 hours after the delivery and then continued walking for the remaining 150 kilometers. No words are sufficient to express her misery.

Reports had suggested that the pregnant woman and her husband had started their journey from Nashik in Maharashtra and were walking towards their home in Satna in Madhya Pradesh.

The Commission remarked, “This amounts to sheer negligence of the state authorities resulting in violation of human rights of the victim woman. Rights to life and dignity of the poor woman have been grossly violated. It is also indignity to motherhood.” In this incident also the Commission had issued notices to the Chief Secretaries of the states of Maharashtra and Madhya Pradesh calling for a detailed report in the matter, within four weeks including the health status of the woman and her child and also if any relief and rehabilitation has been provided by the state authorities to the aggrieved family.

Yesterday when one petitioner had sought a direction to all District Magistrates in the Country to identify migrant laborers who are walking to their native places and ensure that they reach their destination free of cost and in a dignified manner, the Bench comprising of Justices L Nageswara Rao, Sanjay Kishan Kaul and B R Gavai of the Supreme Court had remarked that “How can we stop them from walking?”

Tushar Mehta, Solicitor General of India, who had appeared for the UOI, informed the Bench that, “The Government has already started helping migrant workers. But they are not waiting for their turn and they start walking. Subject to interstate agreement, everybody will get the chance to travel. Using force on them can be counterproductive. They may wait for their turn, rather than starting on foot.” He also remarked that “the government can only request that people should not walk”.

Suspended Functioning of Courts subordinate to Delhi High Court to Extend till May 23rd, 2020 [READ ORDER]