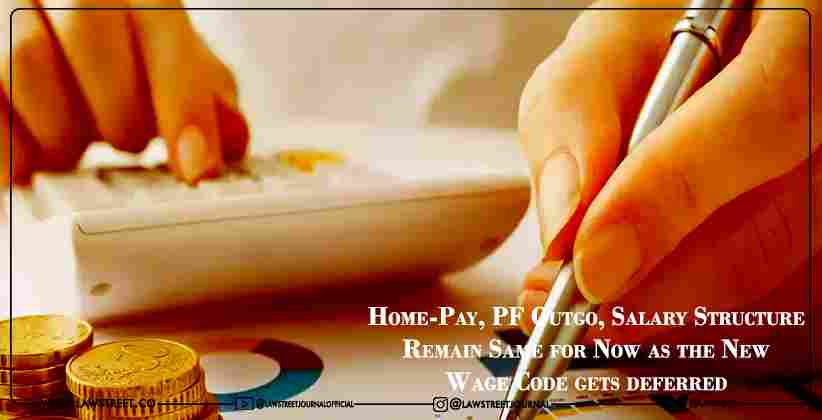 The new salary rules in India were supposed to come into effect by April 1, 2021, however, they have been deferred. It is alleged that the New Wage Code will bring major changes to the existing salary structures for both Private as well as Government jobs.

HR Professionals and staffing companies have also claimed the same. As per the current scenario, the basic pay component is significantly lower than 50% for an overwhelming number of employees.

Along with this three other codes were supposed to be implemented from April 1, namely, the code on occupational safety, health and working conditions, the social security code and the code on industrial relations.

This has been seen as a breather by the industry experts on law, recruitment and compensation. A lot of efforts have been made by these experts in order to bring 50% of the gross pay under the basic pay umbrella apart from other changes under the New Wage Code.

The delay in the implementation helps these experts with extra time to rework these employee compensation structures. Clarity has been awaited on a few points in the New Wage Code, such as on the components pertaining to inclusion or exclusion from the basic pay as per the Compensation Expert Aon.

A lot of changes will be brought in the India Inc after the government notifies the implementation of this New Wage Code.

These rules were passed by the Parliament last year. Changes in the provident fund, take-home salary and pay slips will be observed after the implementation of the same. There will be changes in the balance sheets of India Inc as a result.

As per the new definition of Wages, allowance will be capped at 50% of the total pay. As for the private sector, the basic pay component is supposed to be 50% or more of total salary of a worker. Pertaining to government employees, this basic pay will mean basic pay + DA, that will together have to be 50% or above.

From the staffing firm data available, it can be said that allowances make as much as 80% of compensation for the employees that earn high. These employees are alleged to get the most noticeable hit on the take-home pay.

There is also going to be a rise in the number of Provident Fund Contributions of both workers and companies. Therefore, there is going to be a fall in the take-home salary of most workers.

Parallelly, as the employees will prepare to take their home-pay going down, the companies will have to prepare themselves for an increase in the cost as the PF contributions are going to rise. Additionally, the companies also have to take care of the fact that the gratuity payout will also go up as it is calculated on the basics.

As per the current structure, the employer’s social security contributions are lower, however, they are said to get bigger with this new code.

There will be an increase of average 10% in the costs of the companies as per an HR Expert, owing to the fact that higher payroll costs are going to inflate the wage bill for most employers.

The companies have already started making an effort to explore ways in which they can tweak the compensation package as to keep the costs low.

Lastly, some experts say that this New Code is said to have a positive influence on a lot of aspects. It will bring more social security and compliance for the employees, as explained by Suchita Dutta, Executive Director of the Indian Staffing Federation.