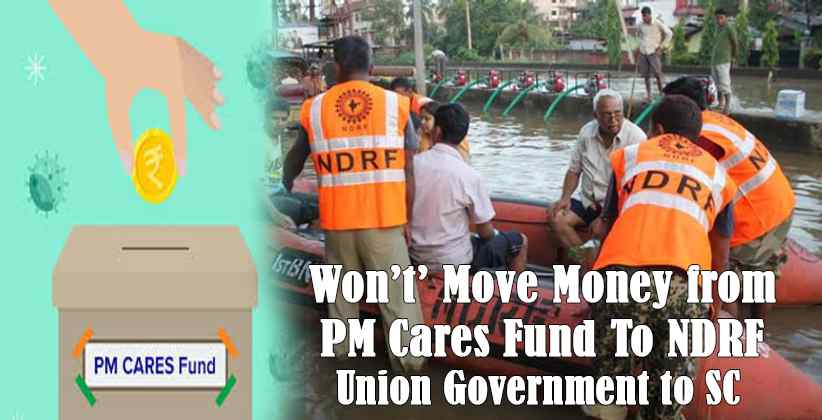 On Monday (July 27, 2020), the Union Government told the Supreme Court that the PM Cares Fund, could not be transferred to the National Disaster Response Fund (NDRF).

The response came after senior advocate Dushyant Dave appearing for NGO “Centre for Public Interest Litigation” stated before the bench headed by Justices Ashok Bhushan, RS Reddy, and MR Shah, that the contributions to the Rajiv Gandhi Foundation were rightly scrutinized by the Government, and the contributions to the PM Cares Fund should similarly be scanned.

The Center submitted that there are several funds that are either established earlier or now for carrying out various relief works. PM Cares is one such fund with voluntary donations.

It also added that there exists a fund stipulated “under section 46 of the Disaster Management, Act, 2005” which is called NDRF. However, the mere existence of a statutory fund would not prohibit the creation of a different fund like the PM Cares Fund which provides for voluntary donations.

The affidavit filed by Ministry of Home Affairs said that the prayer in the PIL for direction to Center to transfer the funds received by PM Cares Fund to NDRF is neither maintainable on merits nor “under Article 32” as all funds other than the funds stipulated under section 46 of Disaster Management, Act, 2005 are separate, different and distinct, created separately under separate provisions.

The Center said that due to the peculiar nature of the COVID-19 pandemic, it was advisable not to formulate straight jacket guidelines on Minimum Standards of Relief.

Dealing with the National Plan for COVID-19 management as sought in the PIL, the government said that a National Disaster Management Plan as per “section 11 of DMA” is already in place at the national level, which deals specifically with biological and public health emergencies.

The government also raised preliminary objections on the Centre for Public Interest Litigation (CPIL) filing the plea, saying that existence of a body only for PIL’s is a contradiction in terms.

Sr. Advocate Kapil Sibal supported the plea for transfer of money in the PM Cares Fund estimated to be Rs.11,000/- crore, to the NDRF. He said that while contributions to the new fund by the corporate houses were counted as the Corporate Social Responsibility (CSR) activity, the same status was not available for the funds set up by CM.

Solicitor General Tushar Mehta appearing for the Centre Govt. said that the PM Cares Fund is voluntary while the funds to the NDRF are also made available through budgetary allocations. “Contributions to NDRF is through budgetary allocations and also voluntary donations. But PM Cares is a pubic charitable trust. Can anyone make an argument that funds from a public charitable trust be taken and put in a statutory fund?” he said while declaring that he amounts would not be transferred to NDRF.