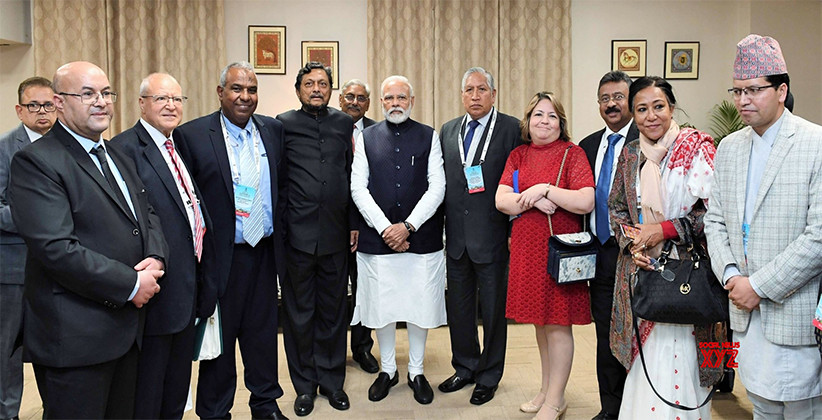 The Supreme Court has organized the International Judicial Conference in February 2020. The 2 days' long conference will host representatives from 24 countries. The Prime Minister of India, Narendra Modi arrived at the venue and was welcomed by the Chief Justice of India Sharad Arvind Bobde with a potted plant. The welcome address was delivered by Justice L Nageswara Rao. PM Modi, CJI Bobde, Union Law Minister Ravi Shankar Prasad, Justices NV Ramana, Arun Mishra, L Nageswara Rao, Attorney General KK Venugopal were present on the dias for the Inaugural event. In the welcome speech, Justice L Nageswara Rao laid emphasis on sharing of thoughts and said that the conference would serve as a market place for ideas which will mutually benefit the judicial institutions across the globe.

The Attorney General Venugopal said, “Traditional concept of human rights violation is illegal incarceration or restricting free speech. But another facet of human rights violation is when people are allowed to live in sub-standard conditions.When Constitution was adopted in 1950, 70 percent of people were below poverty line. It has now been brought down to 21 percent due to efforts of government." He aslo added that when India became independent 70%  of the population was below poverty line today the percentage has decreased to 21%. Schemes like MNREGA, PM Medicine Project have bought help to the people. This conference is a wonderful opportunity to meet our brothers and sisters from across the world. Globalised world is closer than it seems. Issues are unanimous. He concluded by saying that judiciary needs to evolve novel principles to keep terrorism at bay while protecting rights.

Law Minister Ravi Shankar Prasad said that “gender justice is at the core of India’s Constitutional ethos Our PM has taken lead in this regard with ‘beti bachao beti padhao’.People campaigning to influence courts to get the verdicts they want is a dangerous trend developing in world and India. Judiciary should be left completely independent. Be critical, ask questions but in a manner that identity of India remains intact".

The Chief Justice of India began his speech saying, "A conference like this helps to gain knowldege from different parts of the world.India is a melting pot of various cultures; We have assimilated all the cultures that have come to its shores - the Mughals, Portuguese, Dutch and English. In the Northeast of this country there is a Chicken liver test employed to determine guilt in absence of any evidence. The panel decides whether accused is guilty. There is fascinating diversity In India. We are looking toward changing times from conventional court systems to traditional justice. Entire world today is interconnected. Small change on one corner of the world can lead to changes all over the world. We are seeing a Rights revolution, a technological revolution. Our decisions no longer affect only those who live in our jurisdiction but also those who live far outside.

The Constitution of India synthesised the perfect blend of what came before it and tailored it to the Indian system. Rights have been beautifully balanced with demands of public order and health. He also added that The Vyas smriti prescribes various stages of a trial. It seems that nothing has changed much over the years. The smriti defines what a "definition" should be, it should be precise, unequivocal, universally understandable, should not be prohibited from being spoken openly. Judicial system in India is more than 2000 years old." CJI quoted Vivekananda on freedom of Thought and expression and Gandhi on the importance of fundamental duties.

PM Modi started his speech in Hindi welcoming all the representatives from around the world. Said he is happy that the conference is being organised when India is celebrating the 150th birth anniversary of Mahatma Gandhi. Gandhi had clarity of thought which came from his upbringing and Indian values. PM Modi says our ancient scriptures proclaim: "Law is the king of kings, law is supreme”. This conference is being held at the beginning of the second decade of the 21st century. This decade is going to bring many changes in every aspect of the world. PM also added that the three pillars of Indian Constitution have respected each other's boundaries and balanced rights. He also spoke on women empowerment saying no country can develop without gender justice. Our Constitution upholds gender justice under right to Equality. India is one of the few countries where women had right to vote from the beginning of independent India. Educational institutionshave more women than men. And even the armed forces are witnessing the influx of more and more women.  PM concluded by saying we have repealed 1500 laws which were no longer relevant. We have also developed new laws - Transgender rights, Triple talaq, rights of disabled persons, etc.