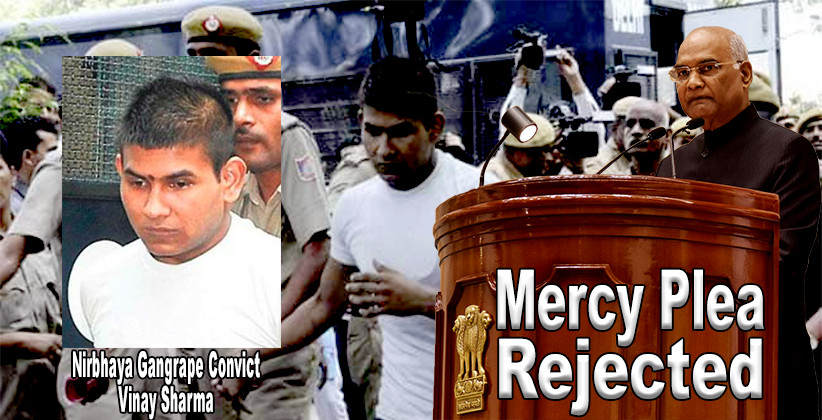 The President of India, Ram Nath Kovind today (February 1, 2020) has rejected the mercy petition filed before him by Nirbhaya rape and murder case convict Vinay Sharma. Earlier in the case, on 31st January 2020, the Patiala House Court of Delhi had passed the order putting stay on hanging of four convicts in Nirbhaya gang rape case, scheduled for 1st February 2020, at 6 AM. The court had put a stay on death sentence till further notice, taking the ground that the convicts have not exhausted all their legal remedies. The applications filed by the convicts took ground of Rule 836 and Rule 858 of prison rules, Rule 836 states that a convict cannot be executed when legal proceedings of a co-convict in the same case are pending and Rule 858 states that a death row convict must be given a notice of minimum 14 days after the rejection of the mercy plea.

After the convicts filed an application asking on stay on death sentences, Additional Session Judge (ASJ) Dharmendra Rana, stayed the execution of death penalties. A session’s court in Patiala house on 17th January issued death warrants against the four convicts. Two of the convicts Pawan Gupta and Akshay Singh have not yet filed mercy plea, and convict Vinay Sharma’s mercy plea has already being rejected by the President of India. The curative petitions filed by three convicts Akshay, Vinay and Mukesh have been rejected by SC and the fourth convict Vinay Sharma is seeking to file for curative petition. Further Mukesh, who has exhausted all of the legal remedies has filed an application stating that he shall not be hanged in isolation till other three convicts exhaust all legal remedies available to them.

The court has appointed Advocate Vrinda Grover as Amicus curiae to represent Mukesh said “Sentence is a common sentence, death warrant is a common warrant. Therefore, these convicts can't be executed separately”, she stated that even if a single mercy plea is pending, no execution should take place in the present case. “Death Penalty is an irreversible process. It would be a travesty of justice if convicts are segregated in terms of sentence for the very same offence,” she further added. Advocates appearing for victim’s family Seema Kushwaha and Jeetendra Jha, appealed that the convict’s lawyers are trying to delay the delivery of justice and manipulating the courts, “These are delay tactics which are causing distress and outrage in public at large. Such delay tactics reflect very badly on judicial pillar of the state. Both the victims and accused should get speedy justice.” Yesterday (January 31, 2020) SC also rejected Pawan Kumar Gupta’s review petition claiming juvenility.