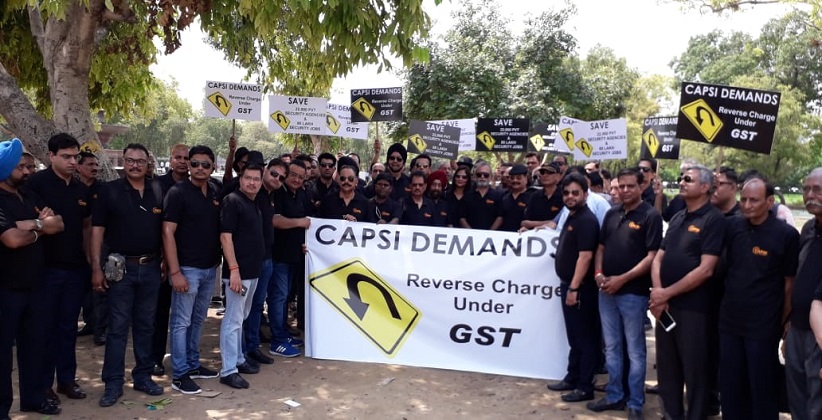 Around 100 owners and employees of Private Security Industry on Wednesday, July 18, 2018, staged a silent protest at India Gate and demanded to streamline of GST rules for the industry which is forcing the closure of private security agencies due to increasing financial burden. They demanded immediate implementation of ‘Reverse Charge Mechanism’ for GST payment so that payment of GST is done directly by service receiver to the government and those running private security agencies should not be burdened by it.

Gathered under the banner of Central Association of Private Security Industry (CAPSI), owners and employees of Private Security Industry, a majority of whom are retired Armed forces officers and personnel, first laid wreath at the Amar Jawan Jyoti at India Gate in respect of martyrs and then staged silent protest in support of their demands. Similar protests were also organized in all state capitals across the country by CAPSI members.

“We have made several representations to the Finance Ministry and to the GST Commissioner demanding streamlining of the GST mechanism for our industry. The major issue, which is forcing owners to close down their companies, is the methodology of depositing GST. The GST has to be deposited by the Security Agencies on 20th of the Month in which the Bill has been raised. However, the payment of these Bills is received by these Agencies only after 60-90 days or more. Thus, the cash flows of this low-margin Industry gets impacted seriously due to 2-3 months delay in getting payments. We have to carry this huge back-breaking burden,” said CAPSI Chairman Kunwar Vikram Singh.

“The logical remedy to this problem is the introduction of ‘Reverse Charge Mechanism’, as done for other industries, where in the Principal Employer (to whom the security guards are outsourced) pay the GST on due date and claim refund on the same at a later date. This will reduce the financial burden on the owners of Private Security agencies,” said Mr. Singh.

He also said, “During the last six months we have raised this issue with the government at various levels to highlight problems being faced by the Industry. CAPSI has also had meetings with Competition Commission of India (CCI), MSME Ministry to raise the industry’s concerns in this regard, but no viable solutions have come forth leaving CAPSI no other option except holding a peaceful dharna.”

CAPSI Chairman further said, “Private Security Industry is one of the largest job providers employing over 80 lakh people, mostly retired personnel from the Armed Forces and Para-Military Forces. Most of the security guards come from economically poor rural backgrounds. Any government decision resulting in the closure of even one average security agency could mean unemployment for large number of security guards and addition to large scale unemployment in the rural sector".

“Security services industry essentially recruits, trains and then provides jobs to this trained manpower. Manpower and other Statutory Costs constitute almost 90% of our billing, while our margins only range up to 5%. Moreover, 2% TDS further erodes these margins. Low margins coupled with delays in receiving payments from clients is creating a huge pressure on the cash flow in the industry."