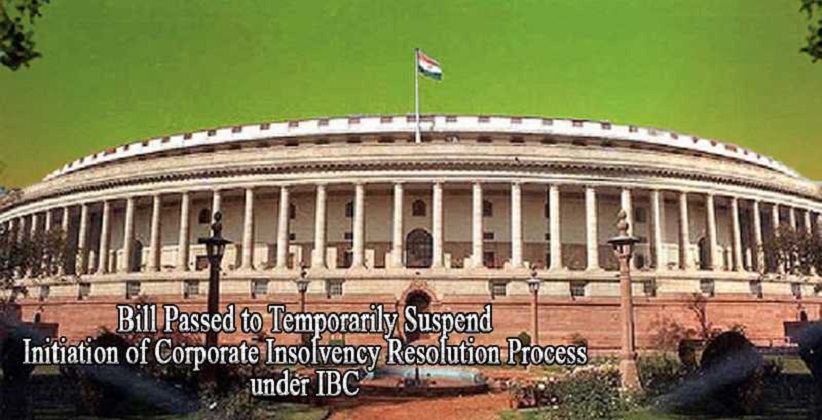 The Rajya Sabha recently adopted an amendment to the Insolvency and Bankruptcy Code Bill, 2020 by voice vote after rejecting opposition amendments. Replying to a brief discussion, Finance Minister Nirmala Sitharaman justified the promulgation of the ordinance saying that the step was necessitated in view of the COVID-19 pandemic situation. She said, there were apprehensions that the country’s economy was likely to be adversely affected.

The Finance Minister said the government had settled thousands of disputed cases involving several lakh crores of rupees without any dissent. She said the Insolvency Bankruptcy Code (IBC) Bill is helping to resolve the dispute much before it is entering the NCLT. This is due to the ecosystem created because of the IBC. The Minister said the number of disposed of cases even before admission in NCLT, as of 31st of July 2020 related to Section 7 is 2,789 company cases, whereas the amount is over Rs 1.96 lakh crore. She said, under Section 9, 11,581 cases have been disposed of whereas under Section 10- 140 cases disposed of amounting to Rs 1.53 lakh crore.

Earlier, the house took up the discussion of the Epidemic Disease (Amendment) Bill 2020, moved by Health and Family Welfare Minister Dr. Harsh Vardhan. Moving the bill, the Minister said, the country faced an extraordinary situation due to the COVID-19 pandemic. He said doctors, paramedics, health workers, and NGOs had faced attacks by the people. Keeping in view of the atrocities on the frontline warriors, the government has promulgated ordinance with several provisions including imprisonment and heavy fines on the people attacking the COVID workers. Dr. Harsh Vardhan said the government has received several complaints that some private hospitals have charged heavy amounts from the COVID patients. In reply to a question, he said, the Centre has also received several suggestions from State Governments in connection with the COVID pandemic.

Anand Sharma of Congress praised the commendable services rendered by doctors, nurses, paramedical staff, health workers, and police personnel. He underlined the need for strengthening the health care facilities in rural areas. He also called for standard operating procedures for maintaining surveillance at the district level.

Earlier in the morning, Chairman M. Venkaiah Naidu asked members to follow safeguards and precautions to be taken for COVID-19 containment. He told them about the facilities available for COVID testing in the Parliament House complex. He said, COVID-19 testing facility is available every day in Parliament and asked the members to undergo tests at their convenience. He informed that yesterday he had held a meeting with the Home Secretary and officials of the Health Ministry and ICMR on measures to contain COVID. Several members raised matters of public importance. They included Dr. Sasmit Patra of Biju Janata Dal, Raja Ram of BSP, Derek ‘O’ Brien of Trinamool Congress, Subhash Chandra Singh of BJD, Dr. Chandrapal Singh Yadav of Samajwadi Party, Neeraj Sekhar of BJP, M. Venkataramana Rao of YSRCP, Ahmed Patel of Congress, Priyanka Chatruvedi of Shivsena, K. J. Alphons of BJP and Y. S. Chowdhury of BJP. Several members also tabled their Special Mentions on matters of public importance.

The house earlier observed silence as a mark of respect to a former Member Nazneen Farooqui who passed away. In his obituary reference, Chairman Naidu said in the death of Nazneen Farooqui, the country has lost an eminent social worker and an able Parliamentarian.

Earlier, the House witnessed noisy scenes for a brief period as the Opposition demanded a discussion on Agriculture Bills passed by the Lok Sabha. Responding to this, Chairman said the bills can be taken the next day.

In his Zero Hour mention, P. Wilson of the DMK asked the government to look into the issue of decline in representation of all communities in the appointment of judges to the Supreme Court.