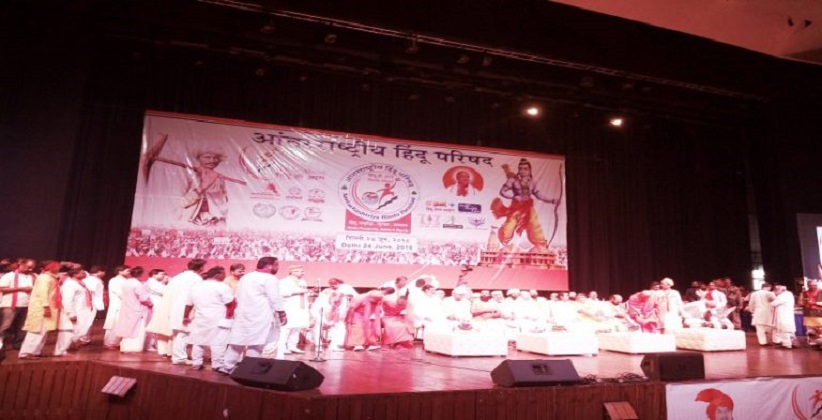 "With the vision on 'Hindu Ahead' and Hindu prosperity,  safety & dignity, for the socio-economic, cultural, religious, educational & socio-political total well-being & rights of all Hindus of all castes, languages, states, creeds, tribes, age & genders, AntarRashtriya Hindu Parishad will work," said by Dr. Pravin Togadia, while launching AntarRashtriya Hindu Parishad(AHP) under the shelter of many religious leaders and in a large gathering of 'Karyakartas' from all over India in New Delhi on June 24, 2018.

Along with AHP, other organizations too were launched on this event.

The communique of Dr. Pravin Togadia revealed that there will be more than 500 Districts of AHP all over India. In this programme, lakhs of  'Karyakartas' are already associated with AHP from many states, districts, villages, and blocks. These 'Sathis of AHP will work with the vision & goal of Prosperity, Safety & Dignity of all Hindus in India and abroad for their total well-being.

Addressing to the media, Dr. Pravin Togadia said that these 'Hindu Sathis' will reach out to 10 crores (100 million) families all over India with 'Hindu Charter of Demands' and run a signature campaign. Those charter of demands are as follow:-

-By passing a law in the Parliament, 3 places should be handed over to Hindus: Kashi for Kashi vishwanath temple, Ayodhya for Rama temple and Mathura complete area for Lord Krishna grand temple.
-Formulation of national law for a complete ban on cow progeny slaughter.
-Common Civil Code
-Abrogating Article 370 & 35 A from J&K and rehabilitating Kashmiri Hindus protecting their lives, livelihood & properties.
-Deporting Bangladeshi & Rohingya Muslims from India.
-Freeing all temples and mutts from Government controls.
-Cancelling Minority status of Muslims, canceling all their minority benefits & making that money available for education & welfare of the poor...
-Formulation of a law to bring  2 children rule in each family.
- All the debts on farmers should be immediately waived off without harassing them for papers or digital etc.
- All farmers should get 1.5 times of price for all their crops in time & with the C2 formula.
- All farmers must get full insurance benefit amount immediately for their crops & other damages for whatever reason.
- The Government should immediately implement all recommendations of Dr. Swaminathan Commission.
-lakhs of youth are unemployed due to the misplaced policies of the government in 70 years. Central & State governments should now give the youth unemployment allowances immediately. There should be 'Youth Employment Commission' with no inference of any government.

Refuting the claims of Modi government, Togadia further said that during the last 4 years nothing has been done by the centre in favour of Hindus or the nation, earlier Hindus had no option but to elect Narendra Modi but now if our demands won't be fulfiled by the centre then we may constitute a party which will give an option to Hindus in 2019 elections.

Speaking against Modi government, Sri Yogesh Ji Maharaj said, "Modi government did nothing in favor of Hindus during the last four years. We gave him both the powers of Centre and Uttar Pradesh but still nothing has been done for the construction of Ram temple then what he could do for Hindus & others. Modi is nothing else but 'Nautanki'. He is Hindu by name, but by actions he is Muslim. One who is greedy for power cannot do justice to his society and religion."

Dr. Togadia also announced that a peaceful democratic march would be initiated from Lucknow to Ayodhya as well as a democratic national campaign/movement for farmers will be undertaken around October.