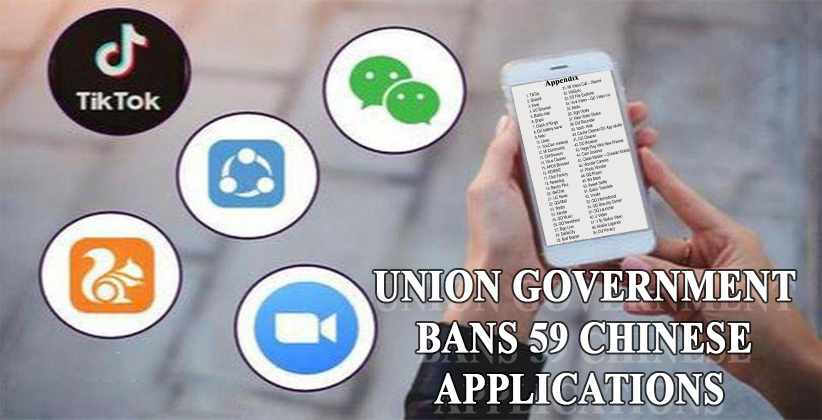 India and China, two strong Asian countries have been engaged in an intense border struggle since May 2020. The core of this dispute is the Line of Actual Control (LAC) between Ladakh, India, and Aksai Chin. This line was drawn after the Sino-Indian war in 1962. With major clashes at key strategic positions in Galwan Valley and Pangong Tso lake along the line, the incursion and occupation of Chinese troops in the Indian territory has become a dispute gaining worldwide attention. The intensity of the situation has been on heat leading to loss of multiple lives in June 2020.

The Indian government has taken measures like stopping exports from China on ports. The Chinese government has retaliated accordingly, and its custom department is now holding Indian exports. At such a time with important decisions being taken on both sides, the Indian regime has now acted on the technological field by banning certain Chinese applications.

A total of 59 applications have been banned. Significant names like TikTok and CamScanner have been included in the list. The decision came on 29th June 2020 with sources informing that the data feed to these apps will be cut off in the next two days and the applications or their updates would not be available on any mobile application store.

Reason behind the ban:

The reason behind such a move has been the alleged theft of data. These apps according to the government sources, take the data from users and it eventually ends up in the hands of the Chinese government. Citing the importance of data protection of Indian citizens and to make sure that any foreign regime does not use it against the government, this decision has been approved by the government.

“On the basis of these and upon receiving of recent credible inputs that such Apps pose threat to sovereignty and integrity of India, the Government of India has decided to disallow the usage of certain Apps, used in both mobile and non-mobile Internet-enabled devices. This move will safeguard the interests of crores of Indian mobile and internet users. This decision is a targeted move to ensure safety and sovereignty of Indian cyberspace", the Ministry stated.

The Computer Emergency Response Team (CERT-IN) has also mentioned that it received many presentations by citizens regarding breach of privacy and security of data which affect public order. It also said that a chorus exists among Indian citizens towards banning apps that harm India’s sovereignty and citizens’ data privacy.

“The Ministry of Information Technology has received many complaints from various sources including several reports about the misuse of some mobile apps available on Android and iOS platforms for stealing and surreptitiously transmitting users' data in an unauthorized manner to servers which have locations outside India. The compilation of these data, its mining and profiling by elements hostile to national security and defense of India, which ultimately impinges upon the sovereignty and integrity of India, is a matter of very deep and immediate concern which requires emergency measures”.

Is the ban only temporary?

Few sources have also revealed that the ban on TikTok may have been initiated by the App itself. Commenting on this and refuting any claims of Data breach, the company in a statement had previously said, “We have been invited to meet with concerned government stakeholders for an opportunity to respond and submit clarifications. TikTok continues to comply with all data privacy and security requirements under Indian law and has not shared any information about our users in India with any foreign government, including the Chinese Government. Further, if we are requested to in the future we would not do so. We place the highest importance on user privacy and integrity.”

It is also pertinent to note that the Madras HC had earlier banned TikTok within the state, citing the spread of pornographic content on the video-sharing platform as its reason. To this, TikTok’s parent company ByteDance had filed a counter-affidavit and appealed to the Supreme Court against the High Court’s order, where after the ban on the app was lifted.

In consideration of these pointers, it could be said that the ban on the Chinese Apps may only be temporary in nature.

Will the Apps become dis-functional overnight?

While a nationwide ban of the listed Chinese Apps has been announced, it will take a while before they disappear from the App Stores or become unavailable for downloads. This is owing to legal app removal processes that are followed by both Google’s Play Store and Apple’s App Store to protect third party IPs involved. It will, therefore, take a while before we see stop seeing these apps on App stores or our phones.

While the ban is overall welcome in view of our political background and the ongoing conflict with the Chinese Government, it could cause a adverse impact on businesses and the revenue flow generated from the use and engagement of these applications. Several of these apps have offices located within the country and are known to employ thousands of Indians. Similarly, apps such as TikTok provide earnings to several content creators and local digital agencies. If there will be any negative adversities from the ban and how it would be dealt with is thus, for time to tell.