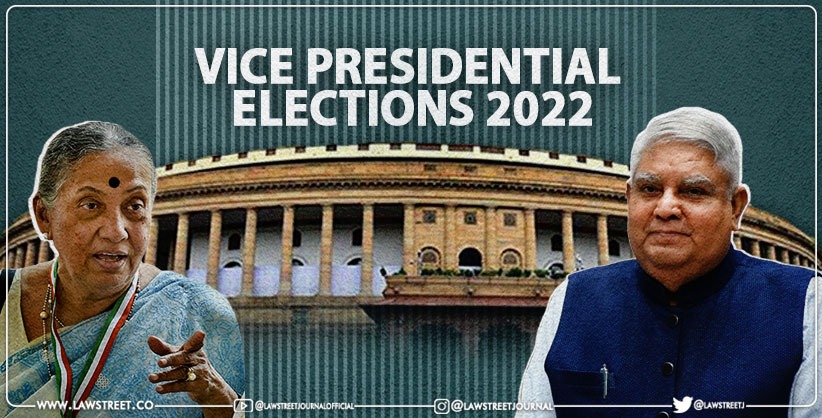 Polling for the Vice Presidential Election 2022 is being held today, i.e. August 6. The voting will take place from 10 am to 5 pm. The ballots will be counted immediately after the voting. Results will be declared by late Saturday evening.

The Secretary-General, Lok Sabha will be appointed as the Returning Officer for the election.

Jagdeep Dhankhar is the vice-presidential candidate of the ruling National Democratic Alliance (NDA), while the opposition, led by the Congress has chosen Margaret Alva as its candidate for the post.

The vice-president is elected by the members of the Electoral College consisting of the members of both Houses of Parliament in accordance with the system of proportional representation by means of the single transferable vote.

This year, for the 16th Vice-Presidential Election, the Electoral College consists of 245 Rajya Sabha members and 543 elected members of the Lok Sabha. According to the Election Commission, the value of the vote of each member would be the same i.e. 1. The voting will be held by a secret ballot.

So far, Dhankhar is comfortably placed to win the Vice Presidential polls, as the Bharatiya Janata Party (BJP) has 303 members in the Lok Sabha and 91 in the Rajya Sabha. The former West Bengal governor is likely to get over 500 votes. Janata Dal (United), YSRCP, Shiv Sena and AIADMK are also supporting Dhankar.

Meanwhile, Alva is likely to get around 200 votes. The Trinamool Congress has decided to abstain from voting as the Mamata Banerjee-led party alleged that it was not consulted before announcing Alva's name. Notably, the TMC has 23 MPs in the Lok Sabha. Meanwhile, the Aam Aadmi Party (AAP), the Telangana Rashtra Samithi (TRS) and the Jharkhand Mukti Morcha (JMM) are supporting the Congress veteran.