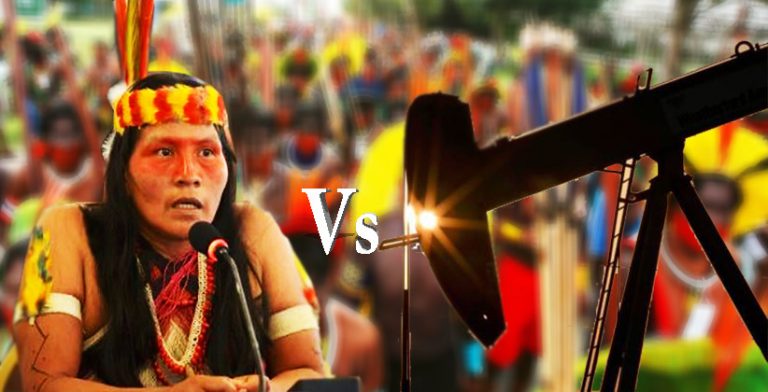 In a historic ruling, an indigenous tribe from the Ecuadorian Amazon has successfully protected half a million acres of their ancestral territory in the Amazon rainforest from being mined for oil drilling by big oil companies.

The Waorani people of Pastaza has also managed to disrupt the contemplated auctioning of 16 oil blocks that cover over 7 million acres of indigenous territory.

The ruling was passed by a three-judge panel of the Pastaza Provincial Court.

The court trashed the consultation process the Ecuadorian government had undertaken with the tribe in 2012, thereby indefinitely suspending the auctioning of Waorani lands to oil companies.

Nemonte Nenquimo, president of the Waorani Pastaza Organization and plaintiff in the lawsuit, said: “The government tried to sell our lands to the oil companies without our permission. Our rainforest is our life. We decide what happens in our lands. We will never sell our rainforest to the oil companies. Today, the courts recognized that the Waorani people, and all indigenous peoples have rights over our territories that must be respected. The government’s interests in oil is not more valuable than our rights, our forests, our lives.”

The constitution of Ecuador protects the millions of acres of land by establishing the “inalienable, unseizable and indivisible” rights of indigenous people “to maintain possession of their ancestral lands and obtain their free adjudication.”

Moreover, the constitution also enshrines the need for prior consultation on any plans to exploit the underground resources, given the probable environmental and cultural impacts on tribal communities.

The Ecuadorian government has claimed that it had reached an agreement with the Waorani over oil exploration in 2012, however, the tribe alleged that the agreement was based on fraudulent practices, it favoured oil companies and profits over the interests of people living on valuable land. The court ordered the Ecuador government to conduct a new consultation, applying standards set by the Inter-American Court of Human Rights.

Mitch Anderson, executive director of Amazon Frontlines, said: “This is a major precedent for indigenous rights across the Amazon. Today, the court has recognized a pattern of deceit, bad-faith and manipulative tactics in the Ecuadorian Government’s attempt to earmark the Waorani people’s lands for oil extraction. This is a huge step forward in the battle to ensure indigenous people’s rights over their lands are respected. Guaranteeing indigenous peoples’ rights to decide over their future and to say ‘No’ to destructive extractive projects is key to protecting the Amazon rainforest and halting climate change.”

Written Statement Will Not Be Taken On Record If Not Accompanied By Affidavit Of Admission/Denial: Delhi HC [Read Judgment]