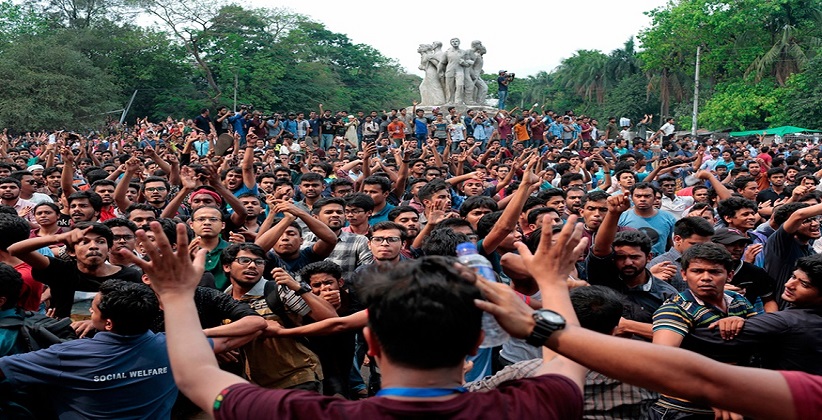 Bangladesh Prime Minister Sheikh Hasina on Wednesday has decided to end reservation system in Government jobs after thousands of students marched across the country in protest against the quota system for special groups.

The protest which was started on Sunday turned violent on Monday with students blocking major roads in Dhaka bringing the congested capital of 15 million people to a standstill.

According to the Bangladesh Governments existing quota system, 56 percent of jobs in the public sector are reserved for children of freedom fighters, women, ethnic minorities, people with disabilities and citizens of some backward districts.

As per the agitating protesters, the special groups represent only two percent of the population while the remaining 98 percent of people fight for the leftover 44 percent of jobs which is discriminatory.

Reportedly, around 5000 protesters rallied at the
campus, making it one of the rarely organized mass protests on such a large scale.

The Country which got independence with the help of India in 1971 is now moving way ahead of Indias political mindset with this revolutionary step. While people in Bangladesh are protesting to scrap reservation, people in India are fighting for minority status.

The same happened in the State of Rajasthan when due to high rising agitation by Gujjar community the State Assembly granted them 5% reservation, taking the overall quota in the State to staggering 54%. After that, Supreme Court intervened and restrained the State Government from conferring the benefits of reservation beyond the ceiling of 50%.

Reservation system started with an intention to implement it only for ten years but the system is still continuing, and now it has become a roadblock to equality, the basic structure of the Indian Constitution. Moreover, it has just become a means to prosper the vote banks of politicians. Instead of good, the system is now hindering the country's growth. It is creating differences amongst the people in the face of casteism.

Now the biggest question that we all shall need to ask ourselves is whether implementing the reservation system is really helping the downtrodden or adversely affecting the general people.

Under the directive principles, the State must ensure that equality prevails in all sections of the society. But can we really claim that we are living in an equal society?