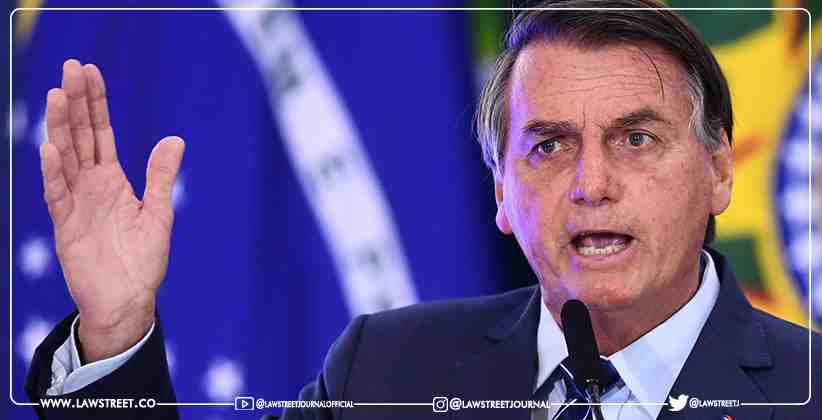 A Supreme Court Judge in Brazil late on Friday (July 2,2021) opened a criminal investigation into President Jair Bolsonaro’s response to allegations of potential corruption in a Health Ministry contract to buy 20 million (2 crores) doses of the coronavirus vaccine produced by India’s Bharat Biotech.

Although it failed to obtain regulatory approval, Covaxin's relatively high price drew the prosecutor's attention to the deal signed in February. To buy the vaccine, the Brazilian Health Minister must pay US $ 320 million (approximately 23.75 billion rupees) to Precisa Medica, the Bharat Biotech broker in Brazil. Therefore, each dose of Covaxin will cost 15 US dollars (approximately 1,100 rupees).

This was significantly higher than what the health minister pays for the US pharmaceutical giant Pfizer (Pfizer) vaccine, which had obtained regulatory approval. According to reports, last year, Bolsonaro also ignored Pfizer’s proposal to provide a vaccine and repeatedly questioned its efficacy.

When allegations of irregularities surfaced, the government suspended the contract on June 29,2021.

According to Reuters, on Friday (July 2,2021), Supreme Court Justice Rosa Weber gave authorities 90 days to collect evidence in the case. The authorities will investigate whether Bolsonaro has committed the crime of "prevarication" - delaying or refraining from action required as part of a public official’s duty for reasons of personal interest. Weber did not dismiss the possibility of prosecutors investigating other possible misconduct in the contract.

Logistics department official Luís Ricardo Miranda had informed the prosecutors that he was under pressure by Alex Lial Marinho, an aide to one of Bolsonaro’s closest allies, to purchase the Bharat Biotech vaccine.

On June 25, 2021, Miranda along with his brother, Luis Miranda, a lawmaker allied with Bolsonaro, testified before a Senate committee investigating the government’s handling of the coronavirus pandemic. Luis Miranda even wore a bulletproof vest when he testified before the panel.

Both of them said that in March they issued a warning to the president about irregularities in the Covaxin transaction. According to reports, Bolsonaro assured them that he would report their concerns to the Federal Police. But the Senate committee stated that there is no evidence that Bolsonaro had asked the police to investigate these allegations.

Since the scandal broke, Bolsonaro and Bharat Biotech have denied wrongdoing. On June 28,2021, the president also claimed that he could not track everything in government, adding that he trusted his ministers.

More than 500,000 people died due to coronavirus in Brazil, the second-highest death toll in the world after the United States. The slow introduction of vaccines had also exacerbated the crisis.

According to Agence France-Presse, tens of thousands of people took to the streets of Brazil on Saturday (July 3,2021) to demand the impeachment of Bolsonaro. This was the third round of demonstrations against his government.

Lima Mendes, a 47-year-old doctor who protested in Rio de Janeiro, said: “This government has killed more than 500,000 people because of its false decisions, false news, lies, and now the absurd corruption scandals about vaccines.

Protesters in the cities of São Paulo, Belém, Recife, and Maceió held up banners that read” Genocidal Bolsonaro”, “Impeachment Already” and “Yes to the Vaccines.