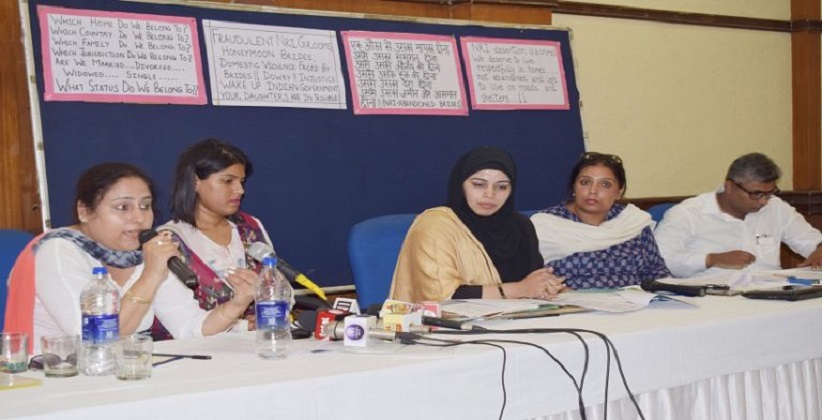 Several Indian parents marry their daughters to prolific NRI grooms hoping for a better future for their girls. Many Indian families sell their properties and spend all their savings to marry their daughters with well-settled NRI grooms. However, in most of the cases, these girls never get a happy life they dreamt of and are often cheated upon.

Hundreds of such women, under the banner of 'Soch Foundation,' organised a press conference at Delhi's Press Club of India. These women narrated their harrowing stories and revealed how they were subjected to domestic assaults and suffered mental tortures at the hands of their so-called NRI grooms. Drawing the attention of the government, these women have demanded stringent actions against such men.

Several tormented women have sought time to meet Union Home Minister Rajnath Singh and Union External Affairs Minister Sushma Swaraj wherein both the ministers have assured to meet them soon. These women would bring their plights to the notice of the government seeking justice and demand stern actions against their NRI husbands who made their lives, a living hell.

"Such greedy men only marry us for dowry," reportedly said by one of the victims.
These women have also revealed that many NRIs are already married and trap innocent girls and their families to get easy money in the name of dowry. Their parents marry them by spending all their life's savings expecting for a better future for their daughters. On the contrary, when their demands of dowry are met, their husbands divorce them sitting abroad.

Zubi Zaidi of Lucknow, while addressing the media, said she was married to Shams Ali - who is employed at a multi-national company outside India. When she went abroad after marriage, she was subjected to all types of domestic assaults and was even forced to clean toilets. When she protested against it she was badly abused by her husband who said Indians are brought here only to clean toilets, why do you have a problem with it? Not just that, after sometime she came to know that her husband was already married to another woman and even has a 10-year-old son. When she confronted him about the same, she was handed the divorce papers and sent back to India.

It was 200 such women like Zubi who joined her to reveal the tapestry of injustice towards them by their NRI husbands in the press conference.

Another woman revealed that she married her daughter to a man in California and some days after the wedding their daughter was thrown out of the house. She's constantly doing the rounds of the court, but there is no one to help her.

Highlighting the plight of such divorcee women, activists from the organisation revealed that as many as 27,000 such cases against cheating NRI grooms had been registered in Punjab alone. These women are forced to live their lives in agony. These victims are looking towards the centre with hope and demand stringent action against such men so that they get justice.

These victimised women highlighting their plight have requested to seize the passports of NRI husbands who cheated them.