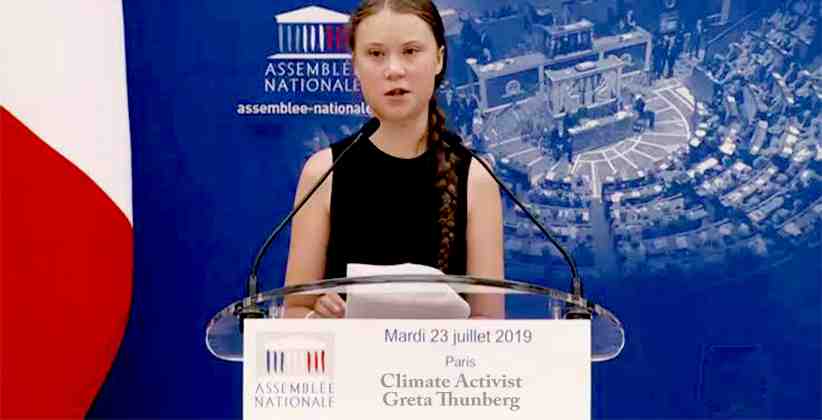 Greta Thunberg, a seventeen-year old from Sweden, who became an increasingly influential figure and a voice for the youth's climate angst and activism with approximately 10 million followers on Instagram, has applied to get a trademark for her name as revealed by her through a public post yesterday (January 30, 2020). She is also applying to get a trademark for the "Fridays For Future" climate crisis movement which she founded in 2018.

She believes that the trademark would stop ‘imposters’ and would help in her launching her new non-profit foundation. “Unfortunately there are still people who are trying to impersonate me or falsely claim that they 'represent' me in order to communicate with high-profile people, politicians, media, artists etc,” she wrote.

“Please be aware that this is happening and be extremely suspicious if you are contacted by ‘me’ or someone saying they 'represent' me. I apologise to anyone who has been contacted and even misled by this kind of behaviour.”

Thunberg said her “name and the #FridaysForFuture movement are constantly being used for commercial purposes without any consent whatsoever.”

"Fridays For Future is a global movement founded by me, it belongs to anyone taking part in it, above all the young people. It can and must not be used for individual or commercial purposes," she further added.

Thunberg has become a strong voice for action on climate change. Her parents were “as far from climate activists as possible” before she made them aware of the issue. Charity begins at home, and therefore, she persuaded her parents to become vegan, and in 2016 convinced her mother to stop flying, despite her mother frequently travelling overseas for work. She was also named as Time Magazine's Person of the Year.

However, her message on tackling rising temperatures has not been well received by everyone. Recently, US Treasury Secretary Steven Mnuchin, told the teenager to go away and study economics before lecturing investors.

Fridays For Future is a climate strike where young people from around the world participate in a massive coordinated strike from school on Fridays, to protest government and business inaction on climate change. It is one of the largest environmental protests in history. It gained momentum after Thunberg started a school strike for climate outside the Swedish parliament in August, 2018.

The Global Climate Strike which took place just before the Climate Action Summit on 23 September, 2019, was a very large scale movement as it included 2500 events scheduled in over 150 countries around the globe. The Climate Action Summit is a meeting where countries are supposed to ramp up their ambitions to curb greenhouse gases under the 2015 Paris climate agreement.

“If you can’t be in the strike, then, of course, you don’t have to,” said Greta, the original school striker who has since 2018 been demanding more action from her government on climate change with weekly protests, told Teen Vogue. “But I think if there is one day you should join, this is the day.”

The seventeen-year old also intends to get a trademark for ‘Skolstrejk för klimatet’ (School Strike for Climate), the phrase written on the sign that jump-started her activism.