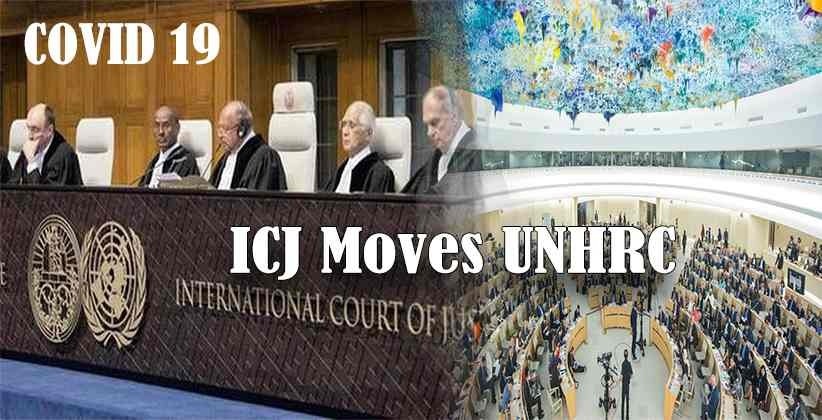 The International Court of Jurists (ICJ), Headquarters in London has moved the United Nations of Human Rights Council (UNHRC) on April 3, 2020 asking China to pay unspecified amount as reparation for having caused “serious physical,psychological, economic and social harm” for releasing COVID 19 on member nations.

The ICJ wanted the UNHRC to inquire and direct the Government of People’s Republic of China “adequately compensate the international community and member-states, particularly India, for surreptitiously developing a biological weapon capable of mass destruction of mankind throughout world and also for serious physical, psychological, economic and social harm caused to these states due to the inaction and negligence to respect the international obligations.”

Adish C.Aggrawala, the President and Senior Advocate at ICJ filed the Petition against China and narrated how the series of events unfolded on December 1, 2019 and said-"On January 23, 2020, nearly two months after the first case of the virus was reported, Chinese authorities announced their 'first steps for a quarantine of Wuhan.' By this time, a significant number of Chinese citizens had travelled abroad as asymptomatic, oblivious carriers".

The petition further said-Chinese government had deliberately censored information and hidden the early warnings given by Dr. Li Wenliang, who was, in fact, reprimanded and initially punished by local authorities in China, he said, adding: “The Chinese government also did not sufficiently contain and curb the travel of infected persons from further contaminating the world.”

Aggrawala also claimed that “the virus was developed in the Wuhan Virology Lab from where it was carefully deployed to affect a miniscule 0.001% of the Chinese population, thereafter, through meticulous planting of “infected” persons around the world, the virus has reached every nook and corner of the planet, affecting health, industries and more importantly, the world’s economy. China, by its constant censorship and hiding of relevant information from the public as well as the WHO, clearly violated the provisions of Articles 6 and 7 of the IHR.”

Aggarwala said, potion out that public authorities are mandated to notify the WHO about the existence of a disease of public and international concern within 24 hours of assessment of public health information.

“Here, the Chinese government provided partial information about the novel coronavirus only on February 14, 2020, after the virus had affected more than 2,000 people and killed about 50,” he said.

Citing Article 25(1) of UNDHR, Aggarwala’s petition said states should refrain from denying or limiting access to health-care services; from marketing unsafe drugs; from imposing discriminatory practices relating to health status and needs; from limiting, withholding, censoring or misrepresenting health information; and from infringing on the basic human rights of people recognized under UDHR.

Now arises the question that whether violation of right to health is a violation of human rights? For the same the WHO has provided clear and conclusive inference.

The aims of the establishment of the WHO itself envisages the highest standard of health as a fundamental right of every human being.

China violated the Responsibility of States for Internally Wrongful Act, 2001 by way of omission or inaction in dealing with the early days of the outbreak of novel coronavirus, he said. “China has violated Clause (b) of the article by failing to act upon the directives of the IHR and omitting to inform WHO, thereby resulting in a breach of international obligation.This is in addition to Chapter III of the IHR, which cast on China the responsibility of acting in a diligent manner in the event of a suspected outbreak which it has failed to do so in the present scenario.”

The ICJ is a body of jurists from across the world, striving to uphold social and economic needs of people.

[COVID-19]: 'Home Delivery' Of FIR In UP's Muzaffarnagar Amid Lockdown