Home International [COVID-19]: Doctors in Pakistan Beaten And Arrested by Police For Protesting Against Lack of PPE [Watch Video]
International

[COVID-19]: Doctors in Pakistan Beaten And Arrested by Police For Protesting Against Lack of PPE [Watch Video] 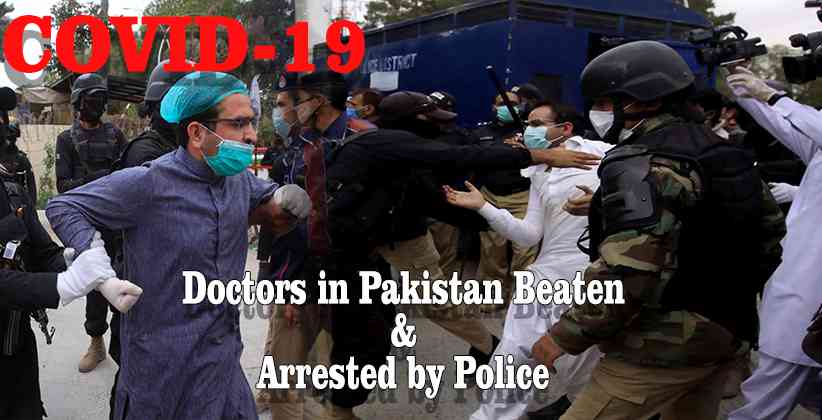 “Police in the southwestern Pakistani city of Quetta have arrested at least 50 doctors who were protesting against the lack of personal protective equipment (PPE) kits for health workers on the front lines of the country's battle against the coronavirus”, officials and doctors' union representatives said.

Doctors in Pakistan have warned of “deplorable” conditions on the frontlines of the country’s coronavirus outbreak, describing the pandemic as untreatable in one region and accusing police of brutally suppressing protests over working conditions.

Representatives of the Young Doctors Association (YDA), who organised the protest, said that "at least 67 members had been arrested on Monday”.

“Release orders had been issued for those detained”, said Dr. Rahim Khan Babar, a YDA spokesman, but they were refusing to leave the police stations where they were being held until their demands for additional PPE kits were met.

Video footage from Monday's (April 06, 2020) protest showed dozens of doctors raising slogans and criticising the provincial government. Shortly afterwards, police stepped in to end the protest, clashing with several of the protesters and detaining dozens.

On Tuesday, doctors across the province went on strike in non-critical care wards to protest against the arrests and lack of equipment, Babar said.

The number of coronavirus cases in Pakistan rose sharply on Monday, with 584 additional cases bringing the country's number of active cases to 3,378, with 54 deaths and at least 429 patients have recovered since the outbreak began in late February, according to government data.

Quetta is the capital of Balochistan, Pakistan's largest but least-populated and poorest province, which has been plagued by some of the lowest socioeconomic indicators in the country for years.

In one of the largest hospitals designated to deal with coronavirus, the Pakistan Institute of Medical Sciences in Islamabad, the capital, there are only 50 or so functioning ventilators. And two-thirds of Pakistan's population lives in rural communities with no access to hospitals equipped to deal with coronavirus patients, or sometimes to any medical facilities at all.

Doctors say a lack of government preparedness has led to dangerous conditions for health workers at major hospitals.

Government officials, however, claimed that, “there were sufficient PPE kits in those hospitals designated to deal with coronavirus patients, and that Monday's protest was more focused on an ongoing contract dispute”.

So far, at least 18 doctors have been infected with the coronavirus in Balochistan, according to government data. In all, the province has recorded 202 cases, with one death and 63 patients having recovered from the virus.

In recent days, however, Pakistan has seen a marked rise in local transmission of the virus between people who have no travel history or history of contact with someone who has travelled, government data shows.

Meanwhile, patients said the doctors' strike in Balochistan meant people in critical need were not receiving the care they needed.

Since 2010, healthcare in Pakistan has been devolved to provincial governments, where there has been rampant mismanagement and underfunding, leading to wildly varying standards across the country.

The dysfunction in Pakistan's coronavirus response also appears to go to the very top, played out in a public dispute between the federal government, provincial governments, and the military over the decision whether or not to implement a full lockdown.