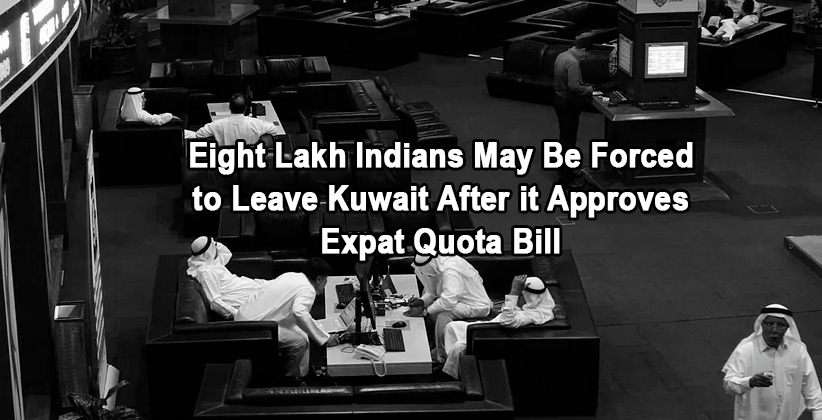 As many as 8 lakh Indians could be forced to leave Kuwait as its National Assembly's legal and legislative committee has given a green light on the draft expat bill.

According to the bill, the Indian population in Kuwait should not exceed 15% of the country’s total population. Notably, Indians constitute the largest expat community in Kuwait, which has a population of 4.3 million.

The legal and legislative committee of Kuwait's National Assembly has said that the draft expat bill is constitutional.

The bill will now be transferred further so that a comprehensive plan is created.

The bill in the backdrop of Kuwait’s planning to rectify its population imbalance, wherein 70% of the people are expats.

Anti-expat rhetoric has been on the rise since the beginning of the COVID-19 pandemic with lawmakers and government officials calling for reducing the number of foreigners in Kuwait.

Out of the 4.3 million people in Kuwait, 3.35 million are expats while Kuwaitis make up only 1.3 million of the population. Among the expats, 1.45 million are Indians. With the bill, 8 lakh Indians could be forced to leave Kuwait.

Kuwait Assembly Speaker Marzouq Al-Ghanem said that the country's population structure has a real problem. He said that a more serious problem is that out of the 3.35 million expats, 1.3 million "are either illiterate or can merely read and write." He mentioned that illiterate expats are not what Kuwait needs.

Last month, Kuwait's Prime Minister Sheikh Sabah Al Khalid Al Sabah had proposed reducing the number of expats from 70% to 30% of the population.

Further, MP Osama Al Chahin urged the Parliament to replace all expats working in the National Assembly with Kuwait nationals.

According to the Indian embassy in Kuwait, about 28,000 Indians are working for the Kuwaiti Government in various jobs like nurses, engineers in national oil companies, and a few as scientists. Most Indians (5.23 Lakh) are deployed in private sectors. Besides, there are about 1.16 lakh dependents. Out of these, about 60,000 Indian students are studying in 23 Indian schools in the country.

Kuwait is a top source of remittances for India. India received around $4.8 billion as remittances from Kuwait in 2018.

Since the coronavirus pandemic, there has been a spike in anti-expat rhetoric.

According to the Johns Hopkins University tracker, Kuwait has reported 49,941 COVID-19 cases with 398 deaths. Reportedly, foreigners account for most infections since migrant workers stay in overcrowded housing. Globally, more than 5 lakh people have died and over 11 million have been infected by Covid-19.