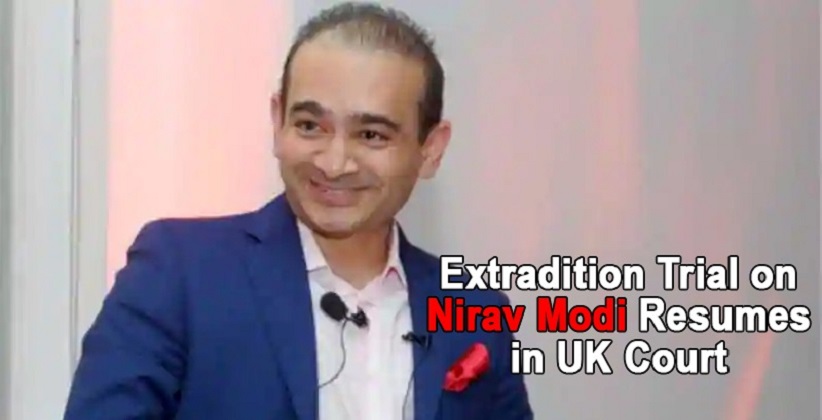 The long-awaited extradition trial of fugitive diamantaire Nirav Modi was resumed on Monday (September 7, 2020) in a UK court. Nirav Modi, who has been lodged at the Wandsworth Prison in south-west London since his arrest in March 2019, appeared before the court via video-link for the second phase of his extradition trial.

Nirav Modi is accused of an estimated USD 2-billion Punjab National Bank fraud and money laundering case brought by the Indian government, is represented at Westminster Magistrates’ Court in London by the UK’s Crown Prosecution Service.

The second phase of the hearings is expected to complete arguments on establishing a prima facie case against the 49-year-old fugitive and also deal with the additional extradition request made by the Indian authorities and certified by UK Home Secretary Priti Patel earlier this year.

A team of the Enforcement Directorate arrived in London ahead of the extradition trial along with the representatives of CBI and logged into the remote court network to observe the UK's Crown Prosecution Service (CPS) present their case before District Judge Samuel Goozee.

Given the social distancing measures being followed by prisons and courts, District Judge Samuel Goozee had conceded that Modi can follow the proceedings via videolink rather than the norm of being produced in person.

It is important that if you have any difficulty with the audio or visual of the proceedings at any time, to let us know immediately, Judge Goozee told Modi.

The Crown Prosecution Service (CPS), appearing on behalf of the Indian authorities, began by laying out the basis of the Indian government’s case.

CPS barrister Helen Malcolm appeared via videolink to tell the court that Modi acquired eye-watering amounts of money fraudulently from Punjab National Bank (PNB). “There is really nothing very complicated about this case. It covers three aspects – the fraud, then laundering of that fraud money and the rotation of goods around the Modi Empire,” she said.

CPS barrister Nick Hearn, the co-counsel in the case, told the court at the last hearing in April, held via teleconference, that the government of India’s representatives would be following the proceedings and giving instructions via the court’s online common viewing platform, given the COVID-19 related travel restrictions.

“We have received comprehensive responses in writing from the government of India, which would reduce the likely length of cross-examinations,” said Hearn.

It was also confirmed that the diamond merchant would not be giving evidence in the case, but his legal team plans to produce around six witnesses, including a jewelry expert as well as judicial and prison experts.

Additional hearings scheduled for November 3, for the judge to rule on the admissibility of the evidence that will be presented before him, and December 1, when both sides will make their final submissions, mean his ruling on whether Modi has a case to answer before the Indian courts are expected only after the final hearing in December.

At a case management hearing ahead of the trial last month, Modi's barrister Clare Montgomery told the judge that she may be seeking a partial reporting ban on the proceedings following allegations of “party political bias” against one of their expert witnesses from India – Retired Indian High Court judge Abhay Thipsay.

She said, “We may have to put in an application for reporting restrictions around the reporting of his (Thipsay) evidence to avoid further public comment on it.”

India, Israel, and Usa Working Together On Developing 5g Tech