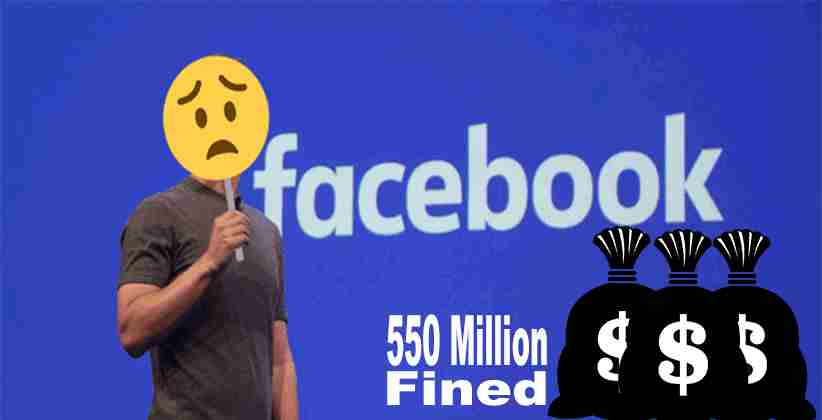 Facebook on 29 January, 2020 announced that it has agreed to pay USD 550 million to settle a class-action lawsuit over its use of facial recognition technology in Illinois, giving privacy groups a major victory that again raised questions about the social network’s data-mining practices. The case has been going on for 5 years now.

The case relates to the usage of Facebook’s photo-labelling service, tag suggestions, which uses face-matching software to suggest the names of people in users’ photos. Plaintiff’s sued Facebook for violation of the Illinois Biometric Information Privacy Act, 2008 contending that its service did not receive “explicit consent” from users before collecting their data.

The announcement was made during an earnings call on 29 January, 2020 where the company announced its 4th Quarter profits which grew USD 7.3 billion giving it a profit of over USD 18 billion for the year ending in 2019. CFO David Wehner made the announcement that the company has a settlement in principle to pay USD 550 million to resolve the suit.

A spokesperson from Facebook said, “We decided to pursue a settlement as it was in the best interest of our community and our shareholders to move past this matter.” ACLU attorney Nathan Freed Wessler said, “This case is a great example of how states can take the lead to protect their residents' privacy rights despite Congress' failure to do the same.”

Counsel for the plaintiff, Jay Edelson while speaking about the issue of data privacy and biometrics said, “Biometrics is one of the two primary battlegrounds, along with geolocation, that will define our privacy rights for the next generation. We are proud of the strong team we had in place that had the resolve to fight this critically important case over the last five years. We hope and expect that other companies will follow Facebook's lead and pay significant attention to the importance of our biometric information.”

While Facebook ended the tag suggestions feature amidst the lawsuit, the company did not stop using facial recognition. A new tool “Face Recognition” with the same technology that was used in the previous controversial feature came into being in 2017.

Facebook has been claiming for many years that it has not done anything wrong. After a failed attempt to throw the suit out by federal appeals court in August, 2019, Facebook appealed to the US Supreme Court which was denied last week. Rather than risking a billion-dollar judgment, Facebook decided to pay a minute chunk of its enormous earnings as damages (which has to be approved by a judge) for the suit.