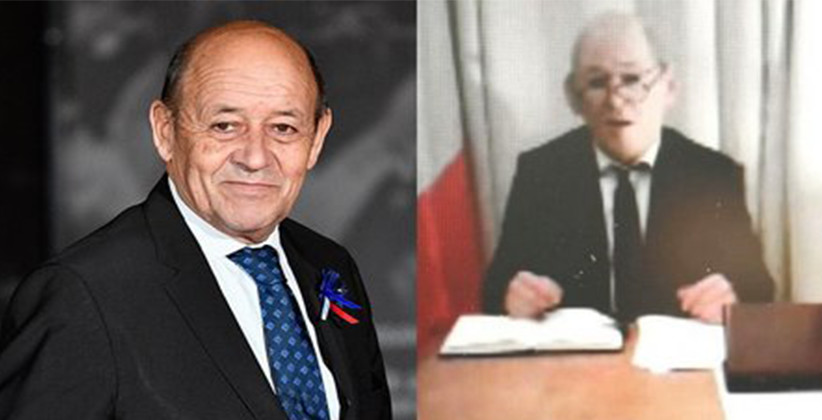 The trial of seven suspected conmen, accused of using a silicone mask to impersonate the French Foreign Minister and extort more than EUR 50 million through Skype, started on 4 February, 2020.

Victims of the fake Jean-Yves Le Drian, who is now the Foreign Minister but was in charge of defense then, included billionaire spiritual leader, the Aga Khan, who parted with EUR 20 million  (USD 22 million). Two Franco-Israeli suspects, Gilbert Chikli, 54, and Anthony Lasarevitsch, 35, are thought to be the masterminds of this scam, while five others face lesser complicity charges.

The scam started in 2015 when the “minister” made calls telephone and sent video links to more than 150 targets of whom three were successfully conned. The calls were made in pretext of seeking funds for “secret operation” with a promise of repayment by the French state. At times, the money was taken for ransom payments or anti-terror operations.

In 2015, French Court convicted Chikli to seven years in prison in absentia for similar scams conducted by him in 2005 and 2006, in which he usurped the identity of the CEOs of a number of businesses. He was arrested two years later with Lasarevitsch in Ukraine. On their phones, police found pictures of a silicone mask of Prince Albert II of Monaco, suggesting they were planning another hoax.

“I hope that justice will take its course and ensure that these crooks are punished as they should be,” the real Le Drian told French media over the weekend, adding he was “appalled” and “offended” by the alleged abuse of his name.

Prosecutors say the Aga Khan, the spiritual leader of Ismaili Muslims, was conned by a Le Drian impersonator in 2016 and made five transfers totaling EUR 20 million to Poland and China. Three of the payments were frozen, but EUR 7.7 million disappeared.

Thereafter, a month later, the Turkish business magnate İnan Kıraç was allegedly convinced to wire more than USD 47 million for what he thought was ransom money for two journalists held hostage in Syria. The other unsuccessful targets include Gabon’s president, Ali Bongo, the French Aids Charity Sidaction, the CEO of the Lafarge Cement Company and the Archbishop of Paris.

The charges have been denied by Chikli and Lasarevitsch. However, in an interview with French television in 2010 over previous scams, Chikli said he was intrigued by the “game” of scamming. “You’ve either got the gift or you haven’t, it’s like famous actors. When it comes to me, you can say that I have a gift,” he said. His story inspired a 2015 film, “Je Compte Sur Vous” (I’m Counting on You), with French actor Vincent Elbaz in the starring role.