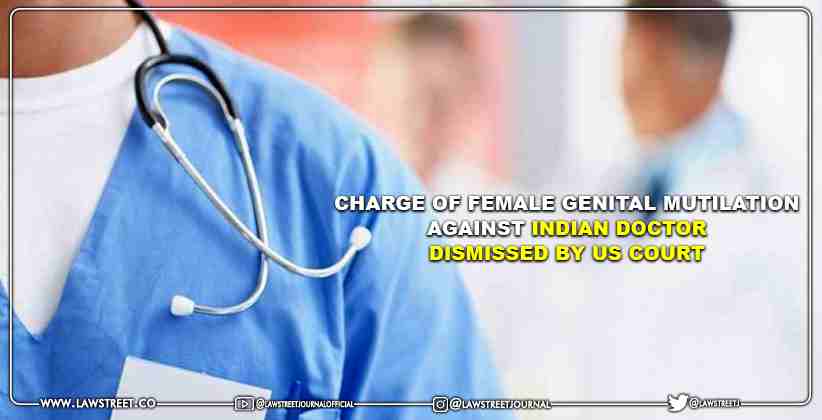 A case, first of its kind in the United States, of Female genital mutilation by an Indian origin doctor has been dismissed by a US Federal judge.

Dr. Jumana Nagarwala who was accused of conspiracy to travel with an intent to engage in illicit sexual conduct involving two 7-year-old Minnesota girls who were brought to Metro Detroit.  She had pleaded to dismiss the charges against her as reported by the Detroit News.

Female genital mutilation is practised by some members of the Dawoodi Bohra, a Muslim sect from India that has a small community in Metro Detroit. Authorities alleged that Minnesota mothers Haseena Halfal and Zainab Hariyanawala brought their daughters to Detroit in Feb 2017 for the procedure.

The case emerged in 2017 April leading to arrest of Dr. Nagarwala along with seven others, a conspiracy that apparently lasted for 12 years.

Judge Bernard Friedman dismissed the fourth superseding indictment filed by prosecutors in the case, ruling that it amounted to vindictive prosecution. She was accused of performing female genital mutilation on 9 girls at a Detroit clinic, Dr. Nagarwala denied it saying she was performing a religious custom.

In April 2017, she was charged under the Female Genital Mutilation statute passed by the congress. Judge Friedman dismissed those charges in 2018 after ruling the statute was unconstitutional. The Judge ruled that Congress did not have the power to enact a federal law that banned female genital mutilation in the United States.

In March 2021 charges of making false statements and tampering with the witnesses were added by the prosecutors which was quashed by the Judge stating it was “clearly unreasonable and indicative of vindictiveness”.

Although Judge Friedman agreed that the defendants supplied false information to the authorities stating that FGM was not being performed in their community, but conspiring or telling such lies was not a crime during the time frame at issue (May 2016 - April 2017) because the statute making FGM a federal offence was unconstitutional.

The court held that the Congress lacked the authority to ban Female genital mutilation, making the statute void ab initio and therefore dismissed the case against Dr. Jumana Nagarwala.