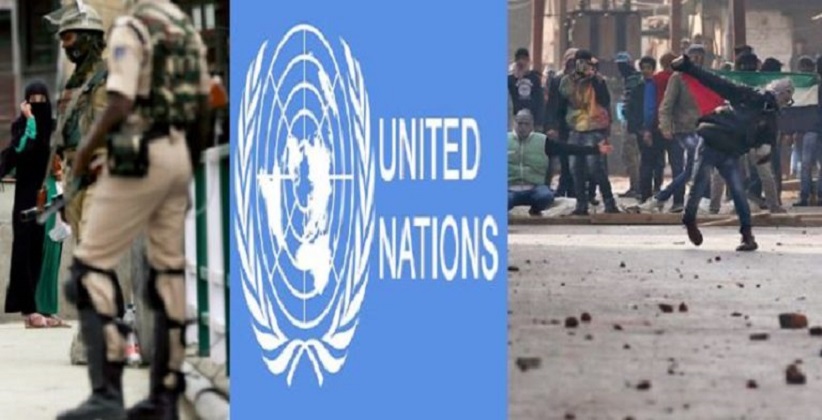 A furious India on June 14th, 2018 described as "fallacious, tendentious and motivated" a UN report that tears into both India and Pakistan for human rights violations in Jammu and Kashmir and Pakistan Occupied Kashmir.

In a strong reaction, the Ministry of External Affairs (MEA) said the report is "overtly prejudiced" and seeks to build a "false narrative."

In the report released on Thursday, the UN talked about alleged human rights violations in both Kashmir and Pakistan occupied Kashmir, and sought an international inquiry into these abuses.

The UN human rights body chief, Zeid Ra'ad Al Hussein, has called for an investigation into "all civilian killings since July 2016" and also into "the excessive use of force by security forces including serious injuries caused by the use of pellet guns immediately."

Ministry of External Affairs said “India rejects the report. It is fallacious, tendentious and motivated. We question the intent in bringing out such a report” and "The report violates India's sovereignty and territorial integrity. The entire state of Jammu and Kashmir is an integral part of India. Pakistan is in the illegal and forcible occupation of a part of the Indian state through aggression."

The State of Jammu & Kashmir enjoys a special status that is enshrined under Article 370 of the Constitution of India. The Article gives autonomy to the State under which the residents of the State live under a separate set of laws and regulation, including those related to citizenship, ownership of property, and fundamental rights, as compared to other Indians.

During the partition, in the year 1947, Pakistan grabbed many parts of the State forcibly. But still, the majority of the land is within the Indian borders. This has resulted in a conflict between the two countries which is going on till date.

Rape Accused Daati Maharaj: Victim was like my Daughter