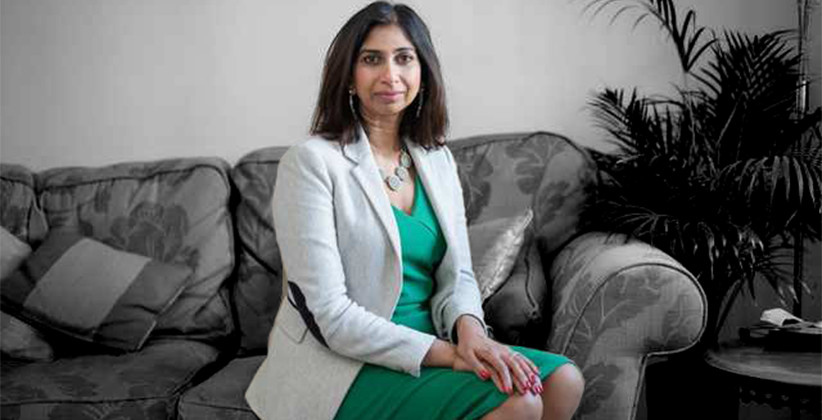 On Monday (February 24, 2020) Indian-origin Suella Braverman was formally sworn in for the post of UK's new Attorney General in British Prime Minister Boris Johnson's reshuffled Cabinet earlier this month. She replaces Geoffrey Cox. The swearing-in ceremony took place at the Royal Courts of Justice in London.

After the ceremony she said, "It is a privilege to be sworn in as attorney general and a moment I will cherish as the second woman to be appointed to this historic role."

“Restoring confidence in the criminal justice system is my top priority. I want to thank my predecessor for his work in this area and his distinguished service to government” she added.

Robert Buckland, the Lord Chancellor and UK Secretary of State for Justice, welcomed the new incumbent to the "vital and historic role" as the chief legal adviser for the government.

"The relationship between the law officers and the lord chancellor is a crucial one. I look forward to working closely with the attorney on matters relating to the rule of law, which is the cornerstone of our democracy and a major factor in our success as a civilised and prosperous nation," said Robert Buckland.

The swearing-in ceremony was attended by justice secretary Robert Buckland, chief justice Ian Burnett and the chair of the Bar Council, Amanda Pinto, among others.

Suella was educated at Heathfield School in London and went on to study Law at Queens’ College, Cambridge. She gained a Masters in Law from the University of Paris 1, Pantheon-Sorbonne and qualified as a New York Attorney.

Called to the Bar in 2005, Suella specialised in public law and judicial review. From 2010-2015 she was on the Attorney General’s Panel of Treasury Counsel. She has defended the Home Office in immigration cases, the Parole Board in challenges by prisoners and the Ministry of Defence in matters relating to injuries sustained in battle.

Suella Braverman was appointed Attorney General on 13 February 2020. She was previously Parliamentary Under Secretary of State at the Department for Exiting the European Union from January to November 2018. Suella was elected as the Conservative MP for Fareham in May 2015. A pro-Brexit campaigner, she was first elected to the House of Commons in 2015 from Fareham and re-elected in 2017 and 2019. She has chaired the European Research Group comprising Conservative MPs favouring a hard Brexit.

The Attorney General is chief legal adviser to the Crown and has a number of independent public interest functions, as well as overseeing the Law Officers’ departments. These are:

No Prior Permission Needed by Bandhan Bank To Open Branches: RBI