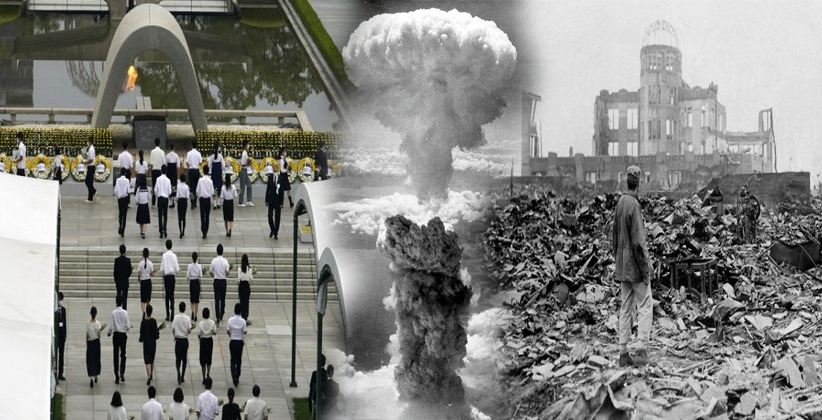 World War two was one of the most devastating wars for the entire human civilization. Military superpowers all over the world were fighting against each other for control. Japan allied with Germany and started invading the Asian nations to establish its dominance over the eastern hemisphere. It went on to attack Pearl Harbour in the Pacific Ocean which belonged to the United States of America. It was this incident that proved to be the trigger point for the USA to jump into the war. On 6th August 1945, American fighter planes dropped a nuclear bomb on the Japanese city of Hiroshima. The explosion had a devastating effect, killing thousands of people immediately with a lot of long-term damages as well.

Each year, the city of Hiroshima remembers the catastrophe which killed more than 140,000 people by the end of 1945. The mayor in his speech urged all countries to reject selfish nationalism and unite to fight threats. As a part of the ceremony, thousands of people gather at the Peace Park located in Central Hiroshima to pray, sing, and set paper cranes as symbols of peace. Entry was limited to only survivors and their families for attending the memorial ceremony.

The city decided to hold this ceremony despite the COVID-19 threat in order to mark the significance of the first atomic bombing in the world continuously for the 75th year. Prime Minister Shinzo Abe attended the ceremony, but the number of foreign visitors was cut down. The attendance was restricted to less than 10% of the usual, with adequate arrangements for social distancing.

“On August 6, 1945, a single atomic bomb destroyed our city. Rumor at the time had it that nothing will grow here for 75 years, and yet, Hiroshima recovered, becoming a symbol of peace.”

On 6th August 1945, the US B-29 warplane Enola Gay dropped a bomb nicknamed “Little Boy” and obliterated the city that not only killed people instantly but also after significant periods of time due to radiation-related illness. At 8:15 am, the exact time when the bomb exploded, the crowd stood in a moment of silence and the peace bell rung.

“When the 1918 flu pandemic attacked a century ago, it took tens of millions of lives and terrorized the world because nations fighting World War I were unable to meet the threat together, a subsequent upsurge in nationalism led to World War II and the atomic bombings. We must never allow this painful past to repeat itself. Civil society must reject self-centred nationalism and unite against all threats.”