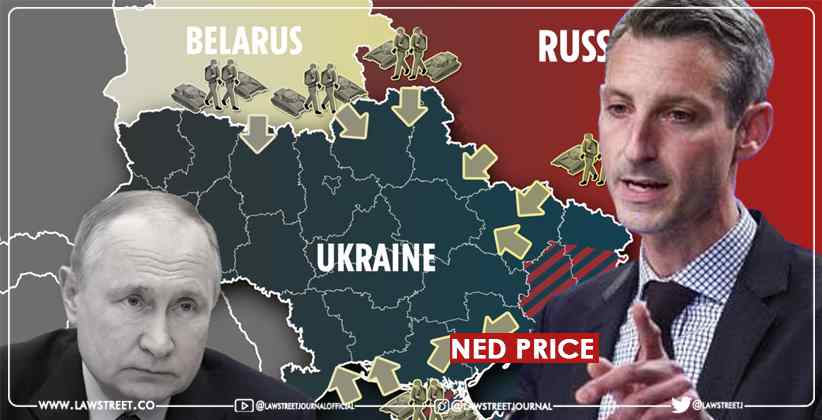 As NED PRICE speaks on United Nation’s responses to the unprovoked, aggressive invasion of Russia on Ukraine, here are some major insights from NED’s speech.

“United States along with our Allies and Partners all over the world will continue to hold the Russian Government accountable.”

“Indeed leaders from all around the world are working together to further politically and financially isolate Russia, including by blocking Russia from International financial systems and economics.”

“We took further measures against Russia’s financial system in response to its violation of International Law in utter disregard for the principals that underpin peace and security around the World.”

“We have sanctioned Putin himself, we are disconnecting Kyiv Russian banks from Swift. We have imposed restrictive measures against Russian Central Bank”

“We are standing up a joint task force to find and freeze assets of sanctioned Russian Companies and other Government officials.”

These actions will severely impact Putin, and impede the use of International reserves. It will limit the ability to fund the ongoing destabilizing activities, said NED.

“As people of Ukraine continue to fight with courage and pride for their country, we will continue to provide the assistance that they need.”

He thanked his allies and partners in expediting additional security assistance to Ukraine and welcomed more such contribution to help Ukraine fight the Russian aggression.

He urged all countries to allow unimpeded entry access to people facing violence as Ukraine opens all its borders for people to seek rescue shelters.

In Support of Ukraine’s urgent Humanitarian needs, He announced additional provision of 54 million dollars to those affected by the Russian invasion.

“And the additional assistance, jointly provided by The Department of State and the US Agency for International Development, will enable Inter Humanitarian Organizations to further support the people of Ukraine”.

“US stands in solidarity and will continue to support the people In Ukraine in the face of Russia’s unprovoked aggression.”

“Today US joins the United Nations Human Rights Council at the 49th regular Sesssion”, he said.

NED said that the timing for this alliance could not be more opportune because since the opening moments of Russia’s unprovoked and unjustified attacks on the Ukraine, reports of human rights abuses had been widespread. “Let there be no confusions, “Russia attacked Ukraine because Ukraine dared to take a democratic path”.

“Just today the Human Rights Council voted overwhelmingly in support of Ukraine’s request to hold an urgent debate on the Human Rights abuses on Ukraine. On Thursday the delegation will take place in Geneva, Switzerland.”