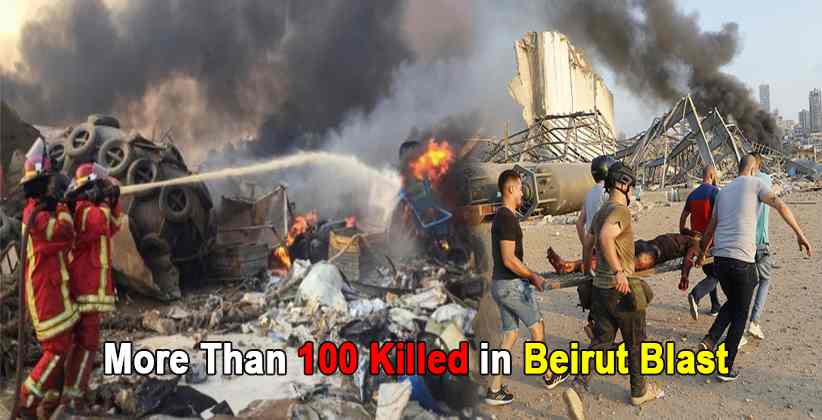 On the eve of August 4,2020 in Lebanon’s capital Beirut, two huge explosions in its port led to an enormous blast wave across the city, killing at least 78 people and injuring thousands more. The scale of the damage is huge, with buildings miles from the port lying in ruin. The blast comes at a terrible time for Lebanon, which is on the brink of financial collapse.

Hospitals that are already coping with the COVID 19 crisis were promptly filled beyond capacity and issued pleas for blood donations and generators to keep the lights going.

Lebanon’s prime minister, Hassan Diab, said the cause of the explosion was 2,700 tonnes of ammonium nitrate. He declared a national day of mourning for the explosion’s victims. The warehouse which was the site of the blast had been the subject of warnings going back to 2014, he said. He would “reveal facts” about the warehouse soon, but did not want to pre-empt an investigation, he added.

Opening an emergency cabinet meeting, President Aoun said, "No words can describe the horror that has hit Beirut last night, turning it into a disaster-stricken city". he later added that the blast was caused by 2,750 tonnes of ammonium nitrate stored unsafely in a warehouse. All port officials have been put under house arrest pending an investigation.

Customs chief Badri Daher told local media that his agency had repeatedly called for the ammonium nitrate to be removed, but "this did not happen, and we leave it to the experts to determine the reasons".

Lebanon’s economy minister, Raoul Nehme, said the wheat in Beirut’s port granaries cannot be used and that the ministry lost track of seven employees in the granaries. The minister also told local media that Lebanon will import wheat and added that the country currently had enough wheat until the imports resume.

Residents of Beirut -stunned, sleepless and stoic - emerged from the aftermath of a catastrophic explosion searching for missing relatives, bandaging their wounds, and retrieving what's left of their homes.

The sound of ambulance sirens and the shoveling of glass and rubble could be heard across the Lebanese capital. Almost nothing was left untouched by the blast, which obliterated the port and sent a tide of destruction through the city center.

Elegant stone buildings, fashionable shopping districts, and long stretches of the famed seaside promenade were reduced to rubble within seconds of the blast.

Donald Trump has said the deadly explosion in Beirut “looks like a terrible attack”, contradicting the information coming from Lebanese officials. Asked whether he was “confident” the Lebanon explosion was “an attack and not an accident”, he mentioned, “Well it would seem like it, based on the explosion.” The president later added he had met US generals and said they “seem to feel that it was”.

UK prime minister Boris Johnson offered the UK’s support and said that there were British nationals affected by the incident.

Governments worldwide have offered support, including the UK, France, Australia, the US, Canada, and Israel.