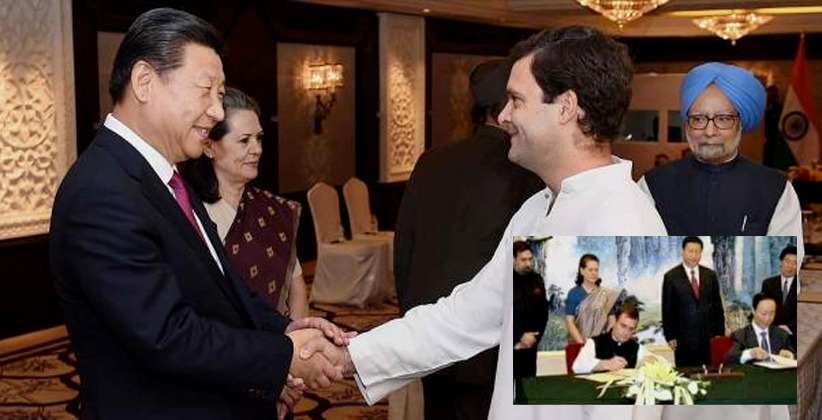 The petition was filed by Goa chronicle editor-in-chief Savio Rodriguez and Adv. Shashank Jha against congress chief Sonia Gandhi, Rahul Gandhi, and some others on the alleged MOU signed between Congress and Chinese Authorities. While hearing the plea the SC on Friday (August 7th, 2020) wondered how a political party can sign any such agreement with a foreign country. The petitioner sought CBI investigation into the MOU signed on August 7, 2008, for exchanging high-level information and co-operation between them.

The petitioner has argued that despite having hostile relations with China, the INC has signed the agreement when it was a leading coalition government. The plea argued, "The Petitioners firmly believe that the nation's security cannot and shouldn't be compromised by anyone. Therefore, this petition has been moved under Article 32 of the Constitution of Bharat, which seeks to bring transparency and clarity regarding the agreement signed between the Respondent No. 1 (INC) and the Communist Party of China which is also the de-facto government of People's Republic of China…The details are very crucial. It is a national security issue and the truth must be told. We had put out that question to Rahul Gandhi in an editorial that I had written as well as on a TV channel, but he has given no answer to the people of India,".

Times now reporter Harish Nair reported that the apex court has dismissed the petition and asked the petitioner to move the High court. The chief justice, before whom the matter was listed previously stated that this is a very serious issue. He has never before heard of any political party entering into an agreement with a foreign country. The petitioner has been given a chance to amend the petition but if the facts are found to be wrong, then the Petitioner will be prosecuted.

Therefore, the Petitioner argued that they have moved to SC asking for the NIA probe into the MOU and the agreement must be made public.

Action initiated against 5,584 companies for not filing tax returns-Delhi government