Scientists Say Coronavirus Is Airborne; Tells WHO to Revise Guidelines 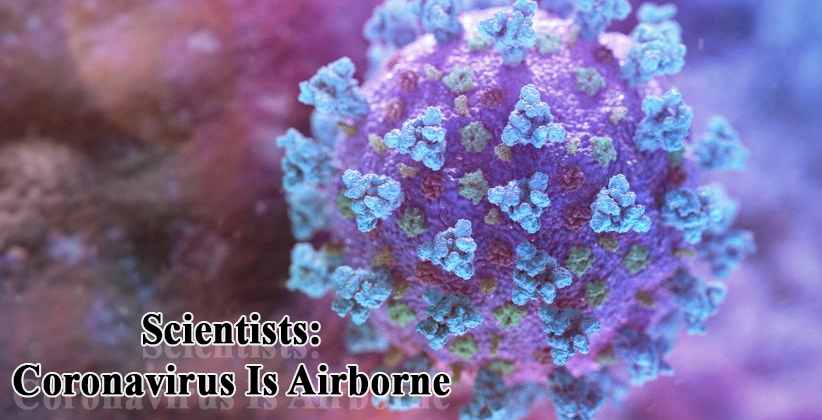 According to a report of the New York Times, published on Saturday 4 July 2020, several scientists around the world have said that it is evident that novel coronavirus can be transmitted through small particles present in the air. They have asked the World Health Organization to revise its recommendations, the report added.

In a letter to the health agency, about 239 scientists from 32 different countries present evidence that proves that small particles can infect people. It will be published in a scientific journal in the coming week, it reported.

As per the NYT report, the scientists have claimed that the virus can now travel across the length of a room through small droplets expelled when an infected person sneezes, coughs or speaks. This is in contradiction with the earlier knowledge wherein it was believed that the virus can be carried only by large droplets that zoom through the air after a sneeze or direct contact with an infected person or surface.

As of now, the health agency has said that the evidence presented before it, regarding coronavirus being airborne, was not convincing, according to the NYT. Since long the WHO has maintained that the virus is spread only by large respiratory droplets that fall on the floor after being expelled from an infected person through mouth or nostrils.

WHO’s technical lead of infection prevention and control, Dr. Benedetta Allegranzi, said, “Especially in the last couple of months, we have been stating several times that we consider airborne transmissions as possible but certainly not supported by solid or even clear evidence.”

The scientists are claiming coronavirus to be airborne, citing that there has been a steep rise in cases where people come in contact with the virus in bars, and restaurants, offices, markets, and casinos. This indicates the possibility that the virus lingers around in the air indoors and infects those present nearby.

The airborne transmission will prove to be fatal for a populous country like India. The consequences of containment in crowded spaces and places with poor ventilation will be significant, as closed spaces will be more vulnerable to the spread of the infection.

In addition to already prescribed methods, such as face masks, social distancing mechanisms, sanitizers, washing hands et cetera, people will have to introduce new measures to cope with the new difficulties and challenges posed by the coronavirus.

Some of the new mechanisms would include the use of face masks in covered spaces; changes in social distancing methods. Health care workers might need N95 masks that can filter out even the smallest of droplets and other particles from the air.

Installation of ventilators and ultraviolet lights in places like educational institutes, hospitals, residences, and offices can help detect the presence of viruses in the surroundings and, if a person gets infected thereafter, to give primary medication and treatment for medium and severe category cases.