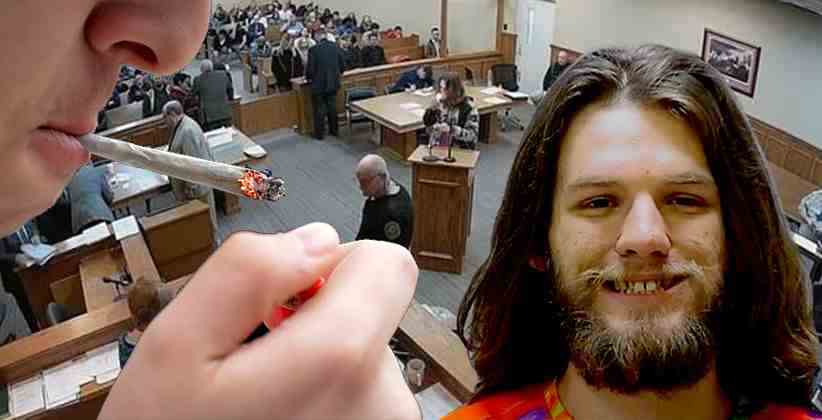 A 20 year old US man named Spencer Boston was arrested on Monday (January 27, 2020) for lighting a ganja cigarette in the court room where he was facing charges for the possession of weed. This person’s video has been flooding the internet, and has become viral within a matter of a few days where in the Court room he is seen lighting a cannabis cigarette saying, “Marijuana is harmless and should be legalized, people deserve better.” He said all that in the presence of a Judge and other officers.

As per the officer Lt. Scott Moore from the Wilson County Sheriff’s Department, Spencer was called before the Judge Haywood Barry, when he started talking about making marijuana legal. But things got rough when he pulled a ganja cigarette from his pocket and lit it in the courtroom.

The officers soon detained him while he was able to take a few puffs and threw the cigarette towards the people sitting saying, “The people deserve better.” For this unprecedented act Boston was charged with possession of marijuana and disorderly conduct. He has also been held for contempt of court for what he did. He has been taken into custody for 10 days by the police, said Lt. Scott Moore to CNN.

The laws regarding possession and usage of marijuana in the United States is listed in the Controlled Substances Act, 1971 (CSA). The CSA classifies and regulates illegal drugs, and lists them according to their medicinal use and potential for abuse. Marijuana is listed as a Schedule 1 controlled substance. This schedule is for drugs that have high chances of potential abuse and hardly any medicinal value. Anyone who grows, markets or stores it; is in violation of a number of federal laws. The CSA further makes it unlawful to knowingly open, lease, rent, maintain or use property for the manufacturing, storing or distribution of controlled substances.

Sanctions on the violation of CSA

Simple possession with no intent to further distribute comes under misdemeanor and is punishable with fine of $1000 and up to 1 year in prison Individuals involved in business of marijuana can receive up to 5 years of prison time along with a fine up to $250,000. There are some states which want to legalize marijuana and in some states it is already legal but this will have no impact on the federal law or the CSA. In 2005 Congress constitutional authority under the commerce clause to ban local marijuana production and consumption was affirmed by the Supreme Court in Gonzales v. Rai. In the Commerce Clause, Congress has the power to regulate purely local activities that are a part of an economic “class of activities” that have significant effect on interstate commerce. This is the reason why no state will affect the federal classification of a Class 1 controlled substance.

Some common conflict areas with marijuana laws is that in terms of employment you can be fired from your job due to use of marijuana during office hours. Renters can face eviction though their marijuana use is under the state laws, many banks avoid giving credit facility to participants of the marijuana industry.