Lawyer Who Led Trial To Impeach Clinton Will Defend Trump 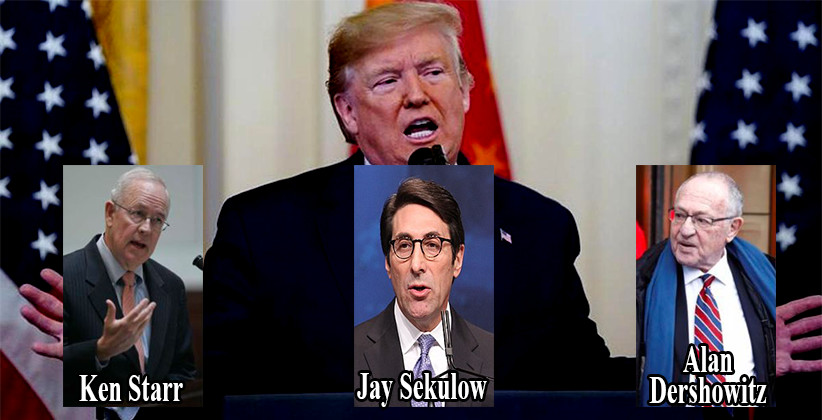 US President Donald Trump has included some of the legal heavyweights of US to defend him in the Senate impeachment trial, which is going to start from next Thursday (January, 23, 2020) with opening statements by both the sides. Notable among them are former independent counsel Ken Starr and prominent lawyer Alan Dershowitz. They will be a part of the legal team lead by White House counsel Pat Cipollone and Trump's private attorney Jay Sekulow.

Besides them, present adviser to the Republican President and former Florida state attorney general Pam Bondi, one of Trump’s private lawyers Jane Raskin and former independent counsels Robert Ray and Eric Herschmann have also been approached and included in the team.

If one looks at the profiles of the heavy weights then Ken Starr is a former federal judge. Starr was also instrumental in former President Clinton’s impeachment as his voluminous investigative report on Clinton’s sexual affair with White House intern Monica Lewinsky had served as the basis for his impeachment on charges of perjury and obstruction of justice.

Alan Dershowitz was a long-time Harvard Law School professor. He was also part of the so-called “Dream Team” of lawyers who had won a 1995 acquittal of former National Football League star and actor O.J. Simpson on charges of murdering his wife and a friend of hers. He is also a well-known constitutional scholar.

Both Starr and Dershowitz have defended Trump in media interviews during the impeachment process.

A team of seven Democrats headed by Adam Schiff will serve as prosecutors in the trial.

On December 18, 2020 the Democratic-led House of Representatives had voted to impeach the President on two charges - one being his dealing with Ukraine and another relating to the obstruction of Congress.

President has repeatedly denied any wrongdoing and called the impeachment process a sham. The Republicans-led Senate is largely expected to acquit him of all charges, but this will only be confirmed in the time to come.

The trial will determine whether Trump is removed from office or not.

Hotel Fined INR 5,000 For Serving Customer An Iron Wire With His Biryani