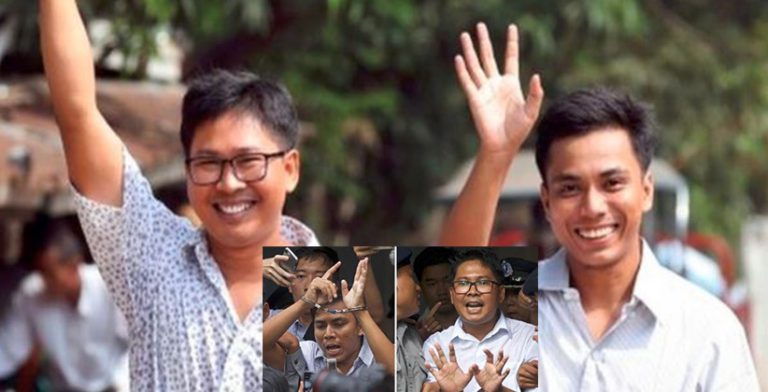 Two Pulitzer Prize Awardee journalists who were jailed in Myanmar for breaking the Official Secrets Acts have been freed on May 7, 2019, after spending more than 500 days behind bars.

The duo was among the 6,250 prisoners who were pardoned by Myanmar President Win Myint.

It is customary of the Myanmar authorities to free prisoners during their traditional New Year, which began on April 17, 2019.

The journalists working with Reuters, Wa Lone, 33, and Kyaw Soe Oo, 29, were awarded the 2019 Pulitzer Prize for international reporting ‘for their work in exposing the military units and Buddhist villagers responsible for the systematic expulsion and murder of Rohingya Muslims from Myanmar.’

Both the journalists were found guilty last September by a district court judge in Myanmar under the Official Secrets Act for illegally possessing official documents. They were sentenced to seven years in prison.

On April 23, 2019, the Supreme Court of Myanmar had dismissed their appeals saying that “They were sentenced for seven years and this decision stands, and the appeal is rejected.”

"Since their arrests 511 days ago, they have become symbols of the importance of press freedom around the world. We welcome their return," Reuters editor-in-chief Stephen Adler said in a statement.

Their conviction had sparked an outcry from diplomats and human rights advocates and even raised questions about Myanmar’s progress toward democracy.