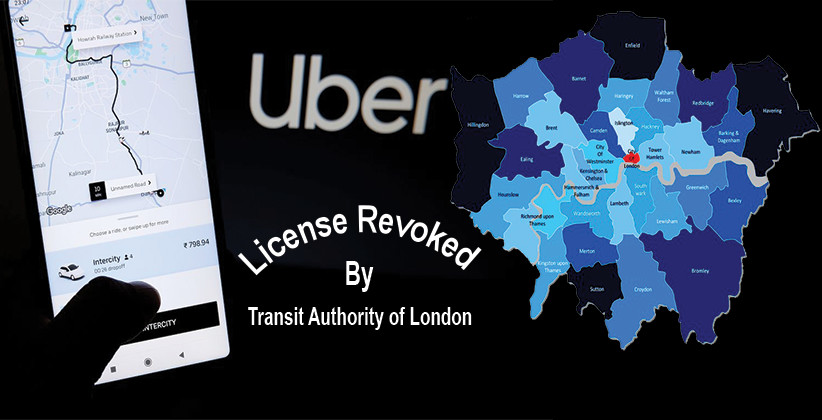 Transport for London (TfL), the transit authority of London has revoked Uber’s license to operate in London since approximately 14,000 trips had been undertaken by unauthorized drivers who had falsely uploaded their pictures in place of other drivers’ accounts thereby putting the lives of their passengers at risk. Owing to concerns regarding passenger safety and other problematic corporate practices such as the ones allowing fake, uninsured and unregistered drivers to operate their vehicles, TfL had kept Uber on a very tight leash since 2017 when it had first stripped Uber of its license.

The court on appeal on the decision of TfL had granted a 15-month period, including an additional 2 months to Uber to right its wrongs which expired in September this year. The regulatory authority was quoted saying that the Uber ride-hailing Application is not “fit and proper”, has shown “a pattern of failures” and a “lack of corporate responsibility.” TfL cited the example of an Uber driver whose private license for hire had been revoked owing to his immoral conduct of distributing obscene pictures of children and he continued to operate the Uber App despite such revocation. These are one of the few blatant fallacies in the car-booking app.

The company Uber is naturally grieved by TfL’s decision quoting it as “wrong and extraordinary” and has planned to challenge it in an appeal within 21 days of the limitation period provided. Meanwhile Uber will continue to operate normally throughout London, even though the allegations of fraud committed by its drivers have not been denied by Uber. Reportedly, nearly 43 drivers have exploited the loophole in the Uber App to defraud its customers. TfL showed a lack of trust in Uber which had failed from preventing repeat offenders from further exploiting the App since previously suspended Uber drivers were able to easily make new accounts and work for Uber in continuity. No one should be allowed to take advantage of their own wrongs, says common law.

Uber vows to have made fundamental changes in its style of operation in London to accommodate the concerns of the regulatory authorities. While these changes have been recognized and welcomed by TfL they hardly suffice. Currently, Uber cabs are being operated by more than 40,000 drivers in London which alongwith four other international locations accounted for one-fourth of Uber’s total bookings worldwide. Uber has promised to make a comeback soon in the interest of the convenience of its wide range of commuters in the city.