Home International US Supreme Court Rejects Challenge to Limits Imposed on Church Services and Gatherings Due To COVID-19 In 5:4 Ruling [READ ORDER]
International

US Supreme Court Rejects Challenge to Limits Imposed on Church Services and Gatherings Due To COVID-19 In 5:4 Ruling [READ ORDER] 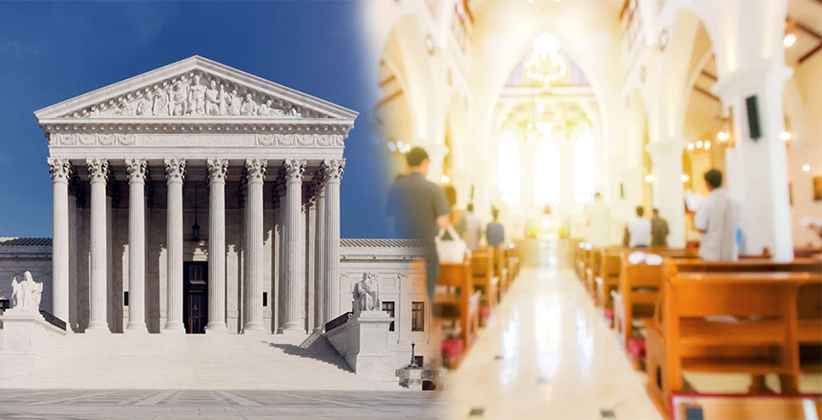 The Supreme Court of the United States of America on May 29, 2020, rejected an application for a temporary injunction filed by South Bay United Pentecostal Church against the restrictions imposed by Gavin Newsom, Governor of California on attendance in places of worship as a part of COVID-19 measures.

To contain the spread of the COVID-19 epidemic, the Governor of California had passed an executive order that forced attendance at worship sites to 25% of the building's capacity or the maximum number of 100 in attendance.

At the outset, the Court noted that,

“Although California’s guidelines place restrictions on places of worship, those restrictions appear consistent with the Free Exercise Clause of the First Amendment. Similar or more severe restrictions apply to comparable secular gatherings, including lectures, concerts, movie showings, spectator sports, and theatrical performances, where large groups of people gather in close proximity for extended periods of time. And the Order exempts or treats more leniently only dissimilar activities, such as operating grocery stores, banks, and laundromats, in which people neither congregate in large groups nor remain in close proximity for extended periods.”

The Court noted that the Constitution had entrusted “the safety and the health of the people” to the politically accountable officials of the States “to guard and protect.” When those officials “undertake to act in areas fraught with medical and scientific uncertainties,” their latitude “must be especially broad.” Where those broad limits are not exceeded, they should not be subject to second-guessing by an “unelected federal judiciary,” which lacks the background, competence, and expertise to assess public health and is not accountable to the people.

South Bay United Pentecostal Church had in its application shown willingness to abide by the State’s rules that apply to comparable secular businesses, including the rules regarding social distancing and hygiene.

The minority opinion held that “What California needs is a compelling justification for distinguishing between (i) religious worship services and (ii) the litany of other secular businesses that are not subject to an occupancy cap” and in their mind, California had not shown such a justification. They also noted that the State cannot “assume the worst when people go to worship but assume the best when people go to work or go about the rest of their daily lives in permitted social settings.”

COVID-19 Lockdown 5: Unlock No 1; Here Is A What All You Can Access [READ ORDER]